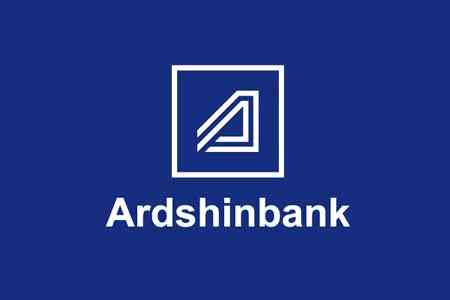 ArmInfo. Ardshinbank, rated Ba3/-/B+, sold its $300m five year bond from a book of over $450m through joint bookrunners Citi and Renaissance Capital. The deal was  sold at par with a coupon of 6.5%, according to the information  published on the website Global Capital.

"Last year both the Armenia sovereign and the bank were upgraded by  Moody's and the bank has seen significant portfolio growth. It seemed  the right time to bring them back to the market, refinance the  outstanding and raise liquidity and funds for future growth.   Investors were keen as, aside from the sovereign, Arshinbank remains  one of the few ways to play Armenia as a story," the statement of  Global Capital reads.

It should be noted that Ardshinbank had previously placed its bonds  abroad, namely it became the first private company in Armenia to  issue Eurobonds on international capital markets. The first issue was  placed on December 9, 2014 with an issue volume of $ 75 million, a  coupon yield of 12%, and a primary offering yield of 12%. The bonds  of this issue were redeemed on December 9, 2017. This issue was  quoted on the Vienna Stock Exchange, and clearing was carried out in  the Euroclear and Clearstream systems. This was the first transaction  of a private Armenian company in international financial markets  after the debut issue of state eurobonds of Armenia in 2013. The  successful debut on the Vienna Stock Exchange inspired Ardshinbank  for the second more voluminous issue of its bonds already on the  Irish Exchange. The second issue, carried out in June 2015, was  larger than the first. This time the issue volume amounted to $ 100  million, the placement was public, the coupon yield was 12%, with a  six-month periodicity of payments.  The maturity date of the second  issue bonds expires on July 29, 2020. As of January 23, 2020, the  volume of $ 25 million remained outstanding from the second issue. JP  Morgan Investment Bank acts as the general manager of the second bond  issue of Ardshinbank.

Along with this, Ardshinbank also placed its bonds on the AMX Armenia  stock exchange. So, as of January 23 this year 3 tranches of  Ardshinbank bonds are quoted on AMX Armenia - one AMD issue in the  amount of 1.5 billion drams and two USD issues in total for $ 15  million. The circulation period of dram bonds is 36 months, and  dollar bonds - 27 months. The yield on the coupon of dram bonds was  set at 10.5%, and the dollar - at 5.5% and 5.4%, respectively. Coupon  payments are made once a quarter. The maturity of the dram issue is  June 10, 2022, and the dollar issue dates to September 3, 2021 and  January 10, 2022.

According to the Financial Rating of the Banks of Armenia prepared by  ArmInfo IC, as of October 1, 2019, the volume of funds raised by  Ardshinbank from the placement of its own bonds amounted to 25.4  billion drams ($ 53.4 million) or 13% of the total market.  Ardshinbank on this indicator as of the reporting date is in TOP-3.

To recall, Ardshinbank was founded in 2003. The majority shareholders  of Ardshinbank as of October 1, 2019 are Arins Group LLC (formerly  referred to as Business Investment Center LLC) with a 67.97% equity  stake and REGION Industrial and Financial Corporation CJSC - 29.52%.  Ardshinbank is the second largest bank in Armenia, having one of the  largest branch networks, consisting of 63 branches: 18 are located in  Yerevan, 42 in the regions and 3 in Artsakh. The Bank has a rating of  international reputable rating agencies equal to the country rating  of Armenia, which is considered a high rating in world practice.