The invasion of Syria is the result of Erdogan`s panic reaction to  problems with the US, EU and NATO 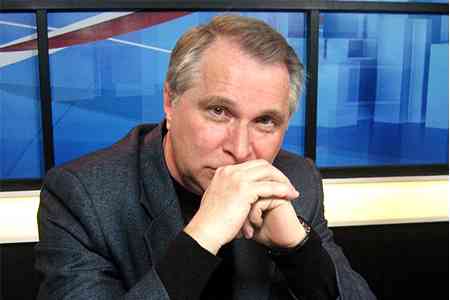 ArmInfo. Co-Chair of the Armenia- Israel International Public Forum, political scientist, Dr. Alexander Tzinker, in an interview with ArmInfo, shares his own  vision of the reasons for the latest Turkish invasion of Syria. He  forecasts the possible consequences of such actions for Turkey and  for its leader Erdogan, lists possible directions for the development  of Armenian-Israeli relations with the opening of the Armenian  Embassy in Tel Aviv, comments on the role and reaction of Iran to  these processes.

- Mr. Tzinker, '' Peace Spring'' became the third Turkish invasion  after the ''Olive Branch" and the ''Euphrates Shield''. What is the  reason for this consistent desire of Recep Erdogan to invade Syria?

Over the recent few years, the whole world has felt Erdogan's desire  to turn Turkey into a regional leader, at least in the Greater Middle  East. Naturally, if he wants to recreate the former Ottoman Empire,  then Erdogan sees himself almost as the sultan of the "recoverd"  Turkey. In my opinion, a lot of problems for Turkey arise precisely  because of this desire. It is as a result of Erdogan's similar  appetites that Turkey has problems with all its neighbors today. From  the very beginning Erdogan has repeatedly tried to take part in the  Syrian conflict. And today, the conflict has subsided, Syria has  maintained integrity, the regime of Bashar al-Assad has survived as a  result of unexpectedly successful actions of Russia, the Free Syrian  Army controls less and less territories, and the United States  supports the Syrian Kurds. It is clear that Ankara's plans did not  include such a situation in Syria. The Turks initially had two goals:  to grab, to get their piece from the collapse of this country, and to  solve the Kurdish problem. By the way, Israel, in the person of Prime  Minister Netanyahu, has already expressed readiness to render all  possible assistance to the Syrian Kurds. All EU countries expressed  resentment of the Turkish invasion of Syria. In response, Erdogan  immediately threatened to open a route to Europe for refugees from  Syria who found shelter in Turkey. But all these are just external  games. Meanwhile, within Turkey, Erdogan also has problems. His party  twice lost the local elections in Istanbul, and the departure from  the AKP of Ahmed Davutoglu, at least, speaks of Erdogan's internal  party problems. The best way to solve internal problems, as before,  are victories in short-term small or large wars, over an enemy that  is well known in Turkey. All this raises the rating. The reason why  Erdogan's call for peace occurred right now is also on the surface. A  little longer and there would be no territories at all under the  control of the Free Syrian Army and, as a result, Ankara would have  no pretexts for an invasion of Syria. But the Kurdish problem in this  case remained in place.  Considering Erdogan's problems with the EU,  NATO and Trump, one gets the feeling that the invasion of Syria is  nothing but cornered Erdogan's panic reaction to all these  developments.

- Will Erdogan be able to solve at least the task to form a buffer  zone between Turkey and Syria?

It seems to me that in the issue of control over the buffer zone  there is a clash of interests between the United States and Turkey.  And, given the complete unpredictability of Donald Trump, it is  completely incomprehensible whether the United States will defend  these interests. In this light, I find it difficult to forecast  whether the US or Turkey will control the buffer zone. But I have no  doubt that it will be created.

Today, the political relations between Turkey and Israel are really  quite cold. And any statement by Erdogan in support of the  Palestinian militants and unjustified attacks against the Israeli  leadership make these relations even colder. Any patience comes to an  end, it seems very likely that the patience of the Israeli leadership  has reached its limit, and it has begun to take quite radical  measures against Turkey.  Among them, I would especially single out  the decision of the Government of Israel, adopted a few days ago, to  completely cease any activity of Turkey in Israel, which goes beyond  the normal work of the embassy.

- The Armenian Foreign Ministry, at last, announced deadline, however  rather approximate ones, for opening the Armenian embassy in Tel  Aviv. Do you expect the opening of the Israeli embassy in Yerevan?

It seems to me that the Armenian embassy most likely will be opened  in Tel Aviv in the spring of next year.  There is a need for funding,  need for an ambassador, etc. Israel, in my opinion, does not plan to  open an embassy in Armenia yet. There are several generally accepted  reasons for opening embassies. The first is the presence of a  large-scale community, which gives the ambassador and consul a field  for work. Israel has no such community in Armenia. The second reason  is the volume of trade, which between our countries, unfortunately,  is small. And finally, the third reason is financial - the opening  and maintenance of any embassy requires money. At the same time,  Armenia certainly has something to take in Israel. We perfectly  understand the motivation for Armenia's very good relations with  Iran. Nevertheless, the establishment of relations with Israel, at  least, will help Armenia demonstrate neutrality and the ability to  have parallel relations with unfriendly countries. And, of course, to  demonstrate to Iranians its own independence in making sovereign  decisions.

- As far as I understand, we have no problems with Iran in the matter  of establishing relations with Israel:

I know that certain Iranian services for a long time asked their  Armenian colleagues questions in the spirit of "why do you need  relations with Israel"? I know that they were told that the  independent foreign policy of Armenia does not imply friendship with  one country to the detriment of the interests of another.

- Thus, it remains only to determine what the Armenian Embassy in  Israel will do:

Recently, more and more often I hear statements from Armenian Prime  Minister Pashinyan, the essence of which boils down to the fact that  Armenians should live in Armenia. Similarly, we say that Jews must  gather on Mount Zion, which, in fact, is Zionism. In order not to  reinvent the wheel, it would be nice for the Armenians to adopt the  repatriation system that had been worked out and tested in Israel for  decades. To make a decision on returning to Armenia, any Armenian  family must clearly understand what awaits it in the homeland. That  is, all the conditions for the repatriation of Armenians to Armenia  should be as clearly defined as the conditions for the repatriation  of Jews to Israel. It seems to me that it is this very issue your  embassy needs to work on. The volume of work is truly huge, but most  importantly, it is accomplishable.  There are other directions too.

The struggle for Armenia after its entry into the CSTO and the EAEU  has not ended. And here I would like to recall the excellent  relations between Israel and the United States, which have further  improved when Trump took the office. And it may very well be that one  day peace treaty on Palestine becomes reality. At the same time, the  Israeli leadership and personally Benjamin Netanyahu have very  trusting relations with their Russian colleagues. It is these  relations that enable Israeli aviation relatively safely to bomb in  Syria the caravans with weapons sent by Iran to Hezbollah. And the  representatives of the Russian Federation in Syria do not react to  this at all. Thus, Israel gained a very decent experience of parallel  relations with two essentially opposing powers. Somehow we manage to  support and develop them. I am not saying that Armenia is in the same  situation today, but it seems to me that studying the Israeli  experience in building such relations would be very useful for  Armenia. And the Armenian Embassy in Israel, if it desired so, could  also work on this issue.

- On October 1, the EAEU summit was held in Armenia, which, in  addition to the heads of the 5 countries of the organization, the  leaders of Singapore, Iran and Moldova attended. Some colleagues are  already assuming that in Yerevan a new level of cooperation of the  EAEU with other countries, including China, was laid. Are relations  with Armenia in the aforementioned context important for Israel?

It is no secret that Israel is holding consultations on cooperation  with the EAEU. This is a vast market, which is purely economically  interesting to us. Of course, here again, some questions arise. In  particular, in view of the imminent start of the implementation of  the Interim Agreement on the Establishment of a Free Trade Area  between the EAEU and Iran. However, it is the economy that continues  to be the engine of politics.

- As for example, the economic relations between Israel and Turkey:

Quite right. Moreover, the Israelis have never had any special  antagonism towards ordinary Iranians.  Accordingly, parallel  cooperation, trade between Israel and Iran with the EAEU are quite  possible, why not.