Asaf Hajiyev: I believe that if the format of the OSCE Minsk Group  does not bring results, then alternative solutions to the Karabakh  issue should be sought. 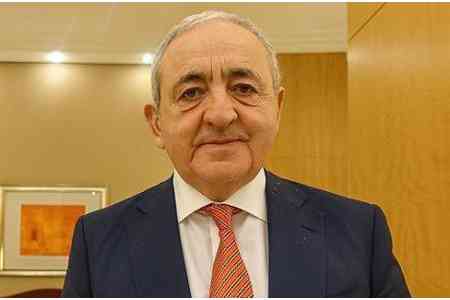 ArmInfo. On the margins of the 52nd meeting of the PABSEC General Assembly, held in Yerevan from November 27 to 28, ArmInfo correspondent talked with the Secretary General of the organization representing Azerbaijan, Asaf Hajiyev,  about the Karabakh conflict, regional problems and the work of the  organization.

Mr. Hajiyev, how do you see the solution of the Karabakh issue? Do  you consider the format of the OSCE Minsk Group optimal, or do you  see other alternatives?

To be honest, I believe that it is impossible to concentrate  attention exclusively on the format of the OSCE Minsk Group. Of  course, the Minsk Group has been engaged in this conflict for more  than 25 years, but since then the issue has not gotten off the  ground. So we must look for alternatives. They come to every country  and then state that "this is a matter of two countries." And if this  is a matter of two countries, then why do you need us?

Yes, this is a matter of two countries. Tolstoy has good words: "All  happy families are the same, every unhappy family is unhappy in its  own way." All conflicts are different, but there must be one  principle for the conflict to get off the ground. This principle, in  my opinion, should be a principle of territorial integrity.  And  within the framework of this principle, realize everything you want,  even though the right of a nation to self-determination, at least any  other right. Because if there is no main principle, this issue will  be endlessly discussed. All the time they are talking about  compromises, but Azerbaijan has lost 20% of its territories, what  other compromise could there be? Lose 20 more?

We have a million refugees. What do we get another million. This  issue was discussed as early as 1920, when it was decided that  Nagorno-Karabakh should become part of Azerbaijan. After the  establishment of Soviet power there was a similar decision of the  Caucasus Bureau; in the USSR, Karabakh was part of Azerbaijan. And  why should Karabakh leave its composition today? Because Armenians  live there? I was recently in the USA and there is a village called  "Little Armenia". Now, if the people living there want autonomy to  become an independent state, how do you think the US authorities will  react to this, will they be given autonomy? We saw similar processes  in Canada, Spain, and how did it all end? And why, in those cases,  everything must be stopped, but here it is necessary to wait 25  years.

In fact, this is a tragedy of two peoples. After all, so many people  died, economic growth retarded, people began to live worse, families  lost breadwinners. Do you really think that's good? The OSCE MG  Chairs should think about it. But in fact, it does not concern them,  and concerns us. We all lost our relatives, many lost our homes, they  did not lose them. I'm not talking about who is more, who is less.  This is not the case, the death of one person is already a tragedy,  and here both countries have suffered very significant casualties.  This issue should be resolved within the framework of territorial  integrity, it is within this framework that the rights of the  Armenian people must be realized. And then, after all, we had lived  together for centuries, had problems, were not, why did it suddenly  become so? After all, there were many joint marriages, and what  should these children do? Now about 30,000 Armenians live in the  territory of Azerbaijan, and there is not a single Azerbaijani in the  territory of Armenia. I think it is worth resolving the conflict  within the framework of the Aland Islands analogy. This is the  territory of Finland, but the Swedes live there. They live in their  cultural values, but live in Finland, and there are no problems.

How do you think regional conflicts hinder the PABSEC activity?

Yes, of course, conflicts inhibit the work of the PABSEC, there are  problems in the region that need to be addressed. Of course, the  purpose of the PABSEC is not to resolve conflicts, however, the  Parliamentary Assembly of the Black Sea Economic several times  adopted declarations with which not all countries agreed, but which  were nevertheless adopted, emphasizing the importance of solving  problems in line with the territorial integrity of countries. It  clearly states that territorial integrity is the way to solve  problems, because there is the Helsinki Agreement, where 3 principles  are laid down - peaceful solution, territorial integrity and the  right of peoples to self-determination.

No one in the world is against peaceful solutions to problems. If  everyone unconditionally and without any preconditions accepts the  principle of the right of a nation to self-determination, then in the  world there will be a huge number of small states that will fight  each other. "This means the end of the world. However, within the  framework of territorial integrity, the principle of the right of  peoples to self-determination can be implemented. And there are  already such examples in the world, as I mentioned, the Aland  Islands.

As you understand, if some countries do not cooperate with each  other, then this limits the activities of the PABSEC. For example, in  our organization there are 12 countries and 7 conflicts. Take at  least yesterday's incident, when the conflict between Russia and  Ukraine was condemned, but there are other conflicts as well. There  is a problem of Nagorno-Karabakh between Azerbaijan and Armenia. As a  result, there is no trade relationship between the two countries.  Because the Azerbaijani territories are under occupation, and until  the Armenian military leaves these territories, Baku's position is  such that cooperation is out of the question. The position of  Azerbaijan can be understood as millions of people have left their  homes.

Today, there are 65 million refugees in the world, which means that  among 110 people there is one refugee.  If we take our region Black  Sea, then among 60 people 1 refugee. If we take only Azerbaijan, then  among 9 people there is 1 refugee. This issue should be the focus of  attention of the world community, and should be resolved. After all,  historically, we are neighbors, and no one can change this. And the  example of the Aland Islands is an excellent example of how, within  the framework of territorial values, the right of peoples to  self-determination is exercised.

How do you evaluate the work of the PABSEC meeting in Yerevan?

The PABSEC meetings were held at a very high level. I want to note  that from year to year the organization improves its work. Over the  past few years, the PABSEC has received observer status in one of the  largest parliamentary assemblies of the world - in the Asian  Parliamentary Assembly, we also received the status of associate  member of the Inter-Parliamentary Union, which includes almost all  world parliaments, in addition, we received observer status in the  OSCE Parliamentary Assembly. This suggests that the Parliamentary  Assembly of the Black Sea Economic Cooperation is already recognized  in the international arena. This gives us the opportunity to  participate in work, speak, talk about problems in the region, and  how to cooperate. After all, the purpose of our assembly is economic  cooperation between countries, and if there is no cooperation between  countries, then there can be no dialogue.

On the other hand, the Black Sea region is one of the most important  regions of the world, rich in energy resources. After all, it is from  our region that oil and gas from the Caspian and Black Seas is  delivered to world markets. An example is the Baku-Tbilisi-Ceyhan oil  pipeline, as well as the Baku-Tbilisi-Erzrum gas pipeline, the  construction of the Baku-Tbilisi-Kars railway, which will allow to  deliver goods from China to Europe not in a month, as it was before,  but in a week, has recently been completed. The region is the  intersection of the world's transport arteries, such as the Silk  Road, the Northern Route, and at the same time it plays the role of a  bridge between Europe and Asia.

How do you explain the problem related to the fact that yesterday  four delegations (Azerbaijan, Turkey, Georgia and Ukraine - Ed.)  Refused medals with which the Chairman of the National Assembly Ara  Babloyan wanted to award them in honor of the 25th anniversary of the  PABSEC? There is a point of view that the whole thing was that the  meeting was held precisely in Armenia, and there is a subtle  political background that slips here?

I heard that in the Armenian press there appeared information that  this issue is related to the secretariat. I want to remind you that  we have nothing to do with medals and awards. We have no right to  award them, nor, moreover, ask to be taken away from someone. This is  done by the decree of the chairman of the PABSEC; this has nothing to  do with the secretariat.

In the speech of the head of the Azerbaijani delegation, it was said  that in this situation there is no political context. I think that  when the issue of medals was discussed, it was said there that they  are awarded to persons who made a serious contribution to the  development of the PABSEC, and not just the heads of delegations,  especially since our head was appointed recently. There are, for  example, a lot of examples of worthy people, for example, Nikolay  Kolomoitsev from the Russian delegation, who has worked in the  organization for 20 years. This contribution is not awarded to  delegations, but to specific people. For example, during a meeting in  Istanbul, at which 9 countries participated in the 14 speakers (12  countries are members of the PABSEC, but in some countries the  parliament consists of 2 chambers - Ed.) It was the speakers who were  awarded the medals, and here, things were different.