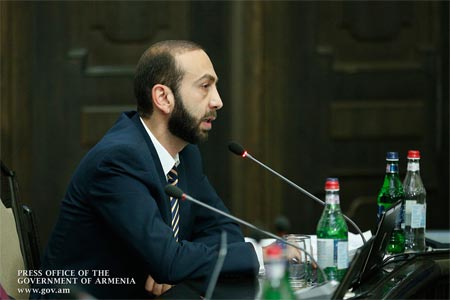 ArmInfo.Foreign Minister of Armenia Ararat Mirzoyan, who was on a working visit in Lodz, Poland, held separate meetings with his counterparts from Slovakia and Rastislav  Kacer and Tanja Fajon.

As the press service of the RA MFA reports, at the meeting with  Foreign Minister of Slovakia Rastislav Kacer, Mirzoyan congratulated  Rastislav Kacer upon the assumption of the responsible position.

The interlocutors expressed readiness to develop Armenian-Slovakian  cooperation in areas of mutual interest, as well as on international  platforms.  Ararat Mirzoyan and Rastislav Kacer also touched upon the  development agenda of Armenia's relations with the EU.  The Foreign  Minister of Armenia briefed his counterpart on the security and  humanitarian challenges following the Azerbaijani aggressions against  the sovereignty and territorial integrity of the Republic of Armenia.  In this context, Minister Mirzoyan highly appreciated the role of the  EU Monitoring Mission, stressing that the situation remains tense.   The positions of the Armenian side regarding the normalization of  Armenia-Azerbaijan relations and the settlement of the  Nagorno-Karabakh conflict were touched upon.

At the meeting of Vice Prime Minister and Minister of Foreign Affairs  of the Republic of Slovenia Tanja Fajon and Arart Mirzoyan, a number  of issues on the bilateral agenda were discussed. The interlocutors  expressed readiness to undertake active steps to more effectively  realize the existing potential of Armenian-Slovenian relations. The  sides exchanged views on the deepening of cooperation on  international platforms.  The issues of mutual interest on the  international and regional agenda were also touched upon. In this  context, Ararat Mirzoyan briefed his counterpart on the situation  resulting from Azerbaijan's maximalist stance and aggressive actions,  and touched upon the approaches of the Armenian side concerning the  establishment of stability and security in the South Caucasus.  The  agenda of the meeting included Issues on the activities of the EU  Monitoring Mission in Armenia.