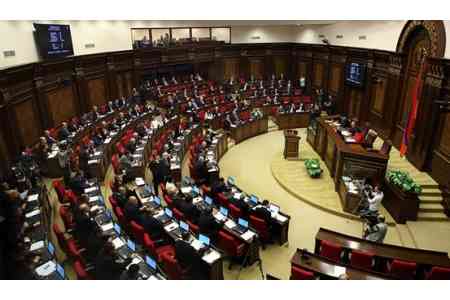 According to Andranik Tevanyan, MP from the "Armenia" faction, on  November 8, the Milli Majlis of Azerbaijan adopted a statement on a  44-day war in Artsakh. This document distorted the meaning of the  Nagorno-Karabakh conflict, the causes of the conflict. According to  the MP, the statement of the Azerbaijani parliament gave erroneous  assessments of the reasons for the 44-day war, on relations with  Armenia, the conversation in the Azerbaijani parliament was in the  spirit of ultimatums and blackmail, unacceptable demands were  presented to the republic that have nothing to do with legal  justification, militant rhetoric was also used.

The statement of the Armenian parliament notes that Azerbaijan  deliberately distorts the essence of the Nagorno-Karabakh problem and  historical facts. The conflict arose as a result of Azerbaijan's  policy of ethnic cleansing aimed at suppressing the will and  trampling on the rights of the population of Nagorno- Karabakh, which  was followed by a large-scale military aggression against the  Nagorno-Karabakh Republic, self-determined in its historical  territory. On May 12, 1994, a ceasefire agreement was signed between  the Ministers of Defense of Armenia and Azerbaijan and the commander  of the Defense Army of Nagorno-Karabakh, which recorded a ban on the  use of force or the threat of its use, which, however, was  periodically violated by Azerbaijan.

The military-political leadership of Azerbaijan is pursuing a policy  of ethnic cleansing and the destruction of cultural values. In the  territories occupied by Azerbaijan, 1,456 Armenian cultural and  historical monuments remain, a huge cultural heritage that Azerbaijan  openly destroys or appropriates - with the falsification of their  ownership. Grossly violating international humanitarian law,  Azerbaijan blocks the search for the remains of the missing persons  in the regions of Artsakh occupied by it and in the territories of  the Republic of Armenia that it seized as a result of the aggression  on September 13, 2022, and also prevents the evacuation of the bodies  of Armenian servicemen and civilians. With its intentions and  policies, Azerbaijan is becoming a source of a new war and  instability in the region, evidence of which is, among other things,  the so-called "Shusha" Declaration signed on June 15, 2021 by the  presidents of Turkey and Azerbaijan, which is unacceptable to us and  worthy of condemnation.

Condemning the aggressive anti-Armenian policy pursued by  Azerbaijan and contrary to international law, which is also reflected  in the statement of the Azerbaijani Parliament dated November 8,  2022, the National Assembly of Armenia declares that Azerbaijan is  obliged to unquestioningly fulfill its obligations within the  framework of the settlement of Armenian-Azerbaijani relations, to  stop its hatred policy towards people of Armenian ethnicity , to stop  military rhetoric, to exclude the use of force and the threat of its  use, as well as its policy of reaching agreements desired through  blackmail and pressure. The Azerbaijani side is obliged to  immediately return its armed forces to their positions until May 12,  2021.  Unquestioningly fulfilling international humanitarian norms  and requirements, Azerbaijan must return the Armenian prisoners of  war and other detainees, the bodies of servicemen and civilians; stop  its policy of ethnic cleansing, destruction and appropriation of  cultural property. We are convinced that in order to settle the  Armenian-Azerbaijani relations and ensure global regional security,  it is necessary to find a formula for peaceful coexistence, but it  should not be in the conditions of the use of force or the threat of  force, violate the rights of one of the parties, threaten the  sovereignty and territorial integrity of the Republic of Armenia.

We are in favor of unblocking communications and cooperation between  regional countries, but we exclude the implementation of this by  providing a corridor through the sovereign territory of the Republic  of Armenia. The language of blackmail and ultimatums is unacceptable  for us. We consider that one of the most important tools for ensuring  the rights and security of the Armenians of Artsakh is the  realization of the right of peoples to self-determination without any  restrictions. The Republic of Artsakh has secured its independence in  accordance with all norms of the legislation of the former USSR and  international law. In accordance with the Declaration of Independence  of the Republic of Armenia, the Constitution and laws of the Republic  of Armenia, the Republic of Armenia, will support the realization of  the right of the Armenians of Artsakh to self-determination, ensuring  their security and international recognition of Artsakh. Artsakh  should not be part of Azerbaijan.

We call on the international community to evaluate the Azerbaijani  aggression and condemn the occupation of the territories of Armenia  and Artsakh, to call to account and impose sanctions against  Azerbaijan for the war crimes committed by it, to contribute to the  full application of the UN Charter by supporting the realization of  the right of the people of Artsakh to self- determination. We appeal  to international humanitarian organizations to take effective steps  in the return of Armenian prisoners of war and other detainees," the  RA National Assembly said in a statement.

Earlier today, at the meeting of the NA Committee on Foreign  Relations , its head Eduard Aghajanyan mentioned that the previous  three days there were discussions of the draft statement with the  members of the "Armenia" faction. Consensus was reached on many  points, but on some points it was not possible to reach a consensus,  so the "Civil Contract" faction will abstain from voting on the text  of the statement submitted by the opposition faction.