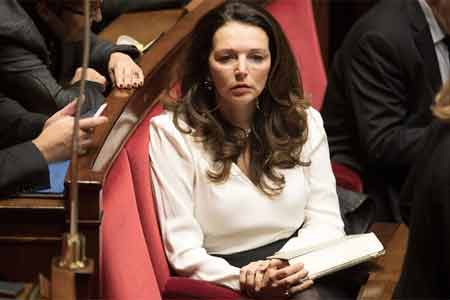 ArmInfo. French MP Valerie Boyer has once again warned the international community against turning a blind eye to Azerbaijan's aggression against Armenia.

During her speech on the occasion of Poland's chairmanship of the  CSTO, she recalled France's solidarity with Ukraine and called for  not forgetting about Armenians and for imposing sanctions on  Azerbaijan.

She called for drawing attention to the war crimes against Armenia,  asking if Armenians' lives are not so precious as Ukrainians'.

Ms Boyer warned against applying double standards and tuning a blind  eye to the crimes against Armenians.

She recalled her fervent support for the French Senate's resolution  of November 15 aimed at sanctions against Azerbaijan. The resolution  also calls for immediate withdrawal of Azerbaijani troops from  Armenia's territory and observance of the agreement of November 9,  2020. The document supports any initiative that would contribute to  long-lasting peace between Armenia and Azerbaijan.

Ms Boyer reaffirmed her support for Armenia's request for an  extension of the EU observer mission's mandate and reminded the  attendees that, under the initial agreement between French President  Emmanuel Macron, President of the European Council Charles Michel,  President of Azerbaijan Ilham Aliyev and Armenia's Premier Nikol  Pashinyan, the mission has a 2-month mandate. The MP called on the  French Government to support the extension of the European mission's  mandate.  Ms Boyer called for immediate repatriation of all Armenian  POWs Azerbaijan is holding in captivity, and their relatives are not  receiving any news about them. She highlighted the importance of  immediately involving Azerbaijan in the negotiations by diplomatic  means for establishing long-lasting peace in the region.

In the context of the Ukrainians facing a severe winter, Ms Boyer  stressed that the Nagorno-Karabakh Armenians faced the same last  winter amid the international community's indifference toward  Azerbaijan's actions.

So accusing Russia over Ukraine means that Azerbaijan and Turkey must  be accused over Armenia in the same way, the French MP said.