Mirzoyan: Azerbaijan responded to Armenia`s proposals on a peace  treaty only yesterday 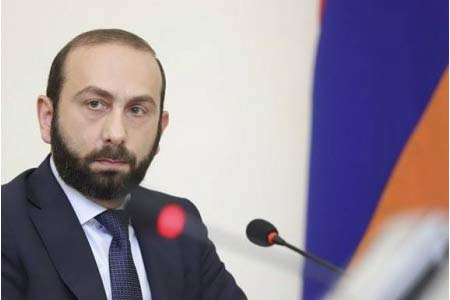 ArmInfo. Baku's statements on delimitation and demarcation between Armenia and Azerbaijan based on historical maps violate the commitments made in Prague and Sochi  to carry out delimitation work between the two countries on the basis  of the UN Charter and the Alma-Ata Declaration. Armenian Foreign  Minister Ararat Mirzoyan stated this in an interview with Armenpress.

When asked to assess Baku's statements that Yerevan refused the  meeting in Brussels, Mirzoyan reminded that an agreement was reached  regarding the next meeting during the quadrilateral meeting held in  Prague.

"We continue to adhere to this agreement and once again express our  readiness to organize a meeting within a reasonable time between the  Prime Minister of Armenia, the President of Azerbaijan, the President  of France and the President of the European Council. We believe that  the meeting in Prague in this format was quite effective and  important in the context of the process of normalization of relations  between Armenia and Azerbaijan. The Armenian side is still interested  in normalizing relations," the RA Foreign Minister stressed.

To clarify what is Yerevan's position on the issue of the  delimitation of the Armenian-Azerbaijani border, taking into account  that Baku insists on conducting this process on the basis of  historical maps, Mirzoyan stressed that this position violates  previous commitments.

"Such statements violate the obligations taken in Prague and Sochi to  conduct delimitation work between the two countries on the basis of  the UN Charter and the Alma-Ata Declaration. Within the framework of  this obligation, delimitation work should be carried out on the basis  of legal acts that existed at the time of the collapse of the USSR in  1991 and had legal force and significance, while on the basis of  official documents, bodies having the appropriate authority to  conduct mapping, make maps and publish maps as of the same period.  Accordingly, talk of historical maps is at least incomprehensible  both by definition and content," the diplomat said.

The head of the Armenian Foreign Ministry also considered it  important to point out the danger of the general rhetoric of  historical maps "for the independence of our countries, because if we  focus on historical maps, it may turn out that the territories of  both the Republic of Armenia, and even more so the Republic of  Azerbaijan, were the territories of other states for centuries. "

"In this regard, I would like to draw attention to one more  circumstance: although following the results of both the Sochi  meeting of November 26, 2021, and the Brussels meeting of April 6,  2022, an agreement was reached that the formation of commissions is  primarily aimed at ensuring border security , after the formation of  the relevant commissions, in September 2022, a new aggression was  carried out against the Republic of Armenia and Azerbaijan occupied  new territories, which calls into question not only Baku's desire to  comply with agreements and international law, but also its intentions  regarding the work of these commissions as a whole," the chief  diplomat of Armenia said.

The President of Azerbaijan also states that peace has been  established around his country and there is no danger of escalation,  then, answering another question, he states that if Armenia does not  sign a peace treaty, there will be no peace. This means that the  President of Azerbaijan from now on takes responsibility for any  possible escalation, especially since Armenia is fully involved in  substantive discussions on establishing peace," the Armenian minister  added.

Asked to assess the current work on the preparation of a peace  agreement, Mirzoyan noted that Armenia submitted its proposals to  Azerbaijan on the settlement of relations or a draft peace treaty and  received their answers only the day before. "So the discussions  continue. We hope to reach an agreement on this issue as soon as  possible, and the mediation efforts of our international partners can  also play an important role in this process," the minister said.

Referring to the current situation in the region as a whole, Mirzoyan  stated with regret that, despite the ongoing negotiations in various  areas, Azerbaijan's maximalist and militaristic statements, unfounded  accusations against the Armenian side and threats to use force do not  stop.

"In addition, the Azerbaijani armed forces continue to be in the  sovereign territory of the Republic of Armenia, and provocative  military operations are regularly carried out by Azerbaijan.

The combination of all of these facts shows that the situation  remains extremely tense, and all our international partners must make  additional efforts to curb Azerbaijan's ambitions and preserve the  fragile peace in the South Caucasus.

The Armenian side, as before, is ready to make every effort to find  mutually acceptable solutions and establish long-term and lasting  peace in the region," Mirzoyan concluded.