From today, as a sign of solidarity, flag of Armenia will fly on  building of Strasbourg City Hall 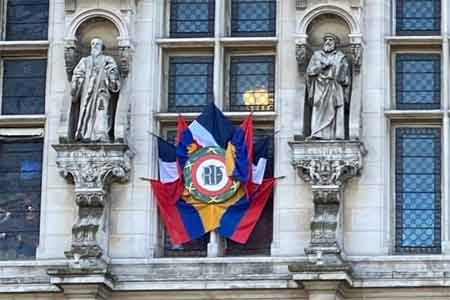 ArmInfo.As a sign of solidarity with Armenia and the Armenian people, from today the flag of Armenia will fly on the building of the Strasbourg City Hall.

As reported by the Permanent Representation of Armenia to the Council  of Europe, on November 24 the flag-hoisting ceremony was attended by  RA Permanent Representative to the Council of Europe Arman  Khachatryan, Strasbourg Mayor Jeanne Barseghian, Strasbourg City  Council member, author of the resolution on supporting  Armenia  Pierre Jakubowicz and other officials.

This symbolic step was planned by a resolution unanimously adopted by  the Strasbourg City Council on November 7, which unequivocally  condemns Azerbaijan's military attack on Armenia, calls for peace and  expresses support for friendly Armenia.