Iranian Foreign Minister: We have no plans for the lands of  neighboring countries, including the lands of Azerbaijan 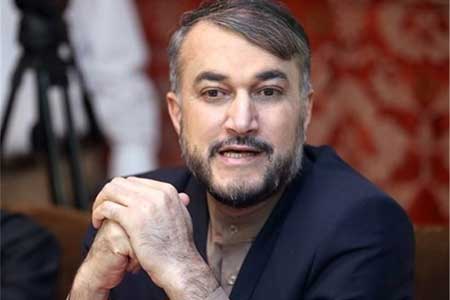 ArmInfo. Iran considers Azerbaijan and Armenia as its two neighbors and does not link  relations with one side at the expense of the other. According to  Farsnews, Iranian Foreign Minister Hossein Amir Abdollahian stated  this at a press conference.

He recalled that last month he visited Yerevan, and recently RA Prime  Minister Nikol Pashinyan was in Tehran. <Some media in the Republic  of Azerbaijan reacted seriously to this trip. We consider Azerbaijan  and Armenia as two neighbors of Iran and we never link our relations  with one side at the expense of the other side. The priority of  consideration of the neighborhood policy is relations with all  neighbors, this is Iran's priority, and we have no plans for the  lands of neighboring countries, including Azerbaijan, but we have  clearly stated to all actors in the Caucasus region that any  geopolitical changes in the region will be met with a reaction from  Iran. We monitor relations with Azerbaijan and other neighboring  countries>, the Iranian Foreign Minister said.