Putin: Consistently fulfilling the agreements reached, it is possible  to achieve sustainable normalization of relations between Armenia and  Azerbaijan 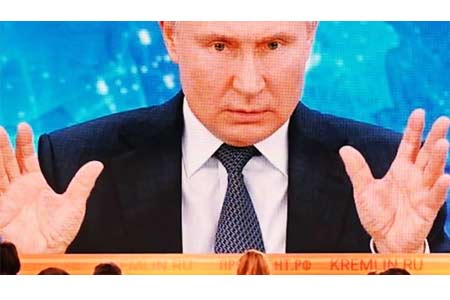 ArmInfo. Russian President Vladimir Putin at the summit of leaders of the CSTO countries said that efforts to comprehensively resolve the acute issues of the  Nagorno- Karabakh settlement require further attention.

"Of course, our further attention is required - I agree with  colleagues who have already spoken about this - and issues related to  efforts to achieve a comprehensive Armenian-Azerbaijani settlement.  Of course, these are acute issues that require our attention," Putin  said during the speech at the meeting in narrow format.  He added  that the trilateral talks in Sochi at the end of October between the  leaders of Russia, Armenia and Azerbaijan created "a good basis for  future compromises on issues of principle."

"Only by consistently fulfilling the agreements previously achieved  in the areas of delimitation of borders, unblocking transport  communications, and solving humanitarian problems, it is possible to  achieve a stable normalization of relations between Armenia and  Azerbaijan. We hope that this will eventually lead to the conclusion  of a peace treaty between Yerevan and Baku," Putin said.