Armine Margaryan: Armenia should find a model that would be  acceptable to all parties 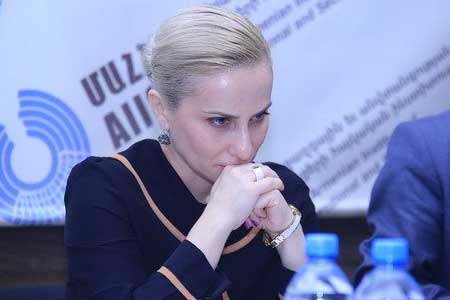 ArmInfo.Azerbaijan's dynastic regime is increasingly becoming a hostage to its own anti-Armenian militant rhetoric, as it considers it the only way to maintain power in the  country.  Armine Margaryan, an expert on military-political issues,  expressed this point of view in an interview with ArmInfo, commenting  on the increasing cases of disinformation spread by official Baku.

She noted that, constantly looking for enemies in the face of  Armenia, Artsakh and Armenians in general, Ilham Aliyev is trying to  instill in his public the idea that there are constant threats from  the Armenian side.  As a result, constant actions are being taken to  increase tension at the borders, and in the country itself,  anti-Armenian rhetoric based on elements of ethnic hatred does not  stop.

However, after the September aggression, such a need for the  authorities to maintain a "fresh" anti- Armenian agenda inside the  country came into conflict with the opinion of the international  community, which began to pay more attention to peacekeeping in the  region. And, nevertheless, the internal agenda prevails,  and it  becomes obvious that Baku's militaristic behavior will be continuous,  and if the geopolitical situation allows, the regime will start a new  escalation, the expert noted.

Speaking about the possibility of concluding a peace treaty against  this background, Margaryan urged to pay attention to the content of  the statements made by the military-political leadership of Armenia  in recent days. She noted that the content of these statements  contains the answer to the given question. One thing is not clear,  the expert stated, how it is possible to go for the signing of a  peace treaty, when, in parallel with the negotiations, militant calls  are still being made alongside the negotiations, accompanied by local  military operations.

It is for this reason, the expert believes, that the Armenian side  brings the issue of guaranteeing the security of the borders of  Armenia and Artsakh to the agenda. Obviously, these statements are  made after political consultations with a number of countries and  organizations, evidence of which is the reaction of the United  States, France, and the European Union. If, before the conclusion of  a peace treaty, it is possible to agree on the formation of  delimitarized zones, in which international guarantees will operate,  it will become a major deterrent for Azerbaijan.

Moreover, according to Margaryan, international guarantees should be  supported by the presence of a monitoring mission that has an  appropriate, even civilian, mandate. But even in this case, Russia  should be represented as part of the mission, since Armenia continues  to remain in the CSTO and in a single security system. Without a  doubt, against this background, the interests of Russia, which,  however, has enough of its own problems, should be considered. " The  most important issue for Armenia today is the search for a model that  can be mutually acceptable for all parties," the expert emphasized.

According to Margaryan, the Armenian public should be aware that  while Armenia is a CSTO member state, military infrastructure  facilities and military formations of another state cannot be  deployed on its territory. Therefore, it is extremely important to  achieve the formation of a demilitarized zone on the  Armenian-Azerbaijani interstate border, with the deployment of a  mission with an international mandate.

This mission may have a civilian component, but even in this case it  will be of strategic importance and will aim to solve strategic  problems. For example, the expert believes, this civilian mission can  work within the OSCE, based in its work on a comprehensive concept of  security, namely, to consider not only military- political issues and  human security issues, but also economic and humanitarian issues.  This is what the Aliyev regime is most afraid of, since such a  mission will become a serious obstacle for Azerbaijan in its desire  to constantly influence Armenia through the use or threat of use of  force.