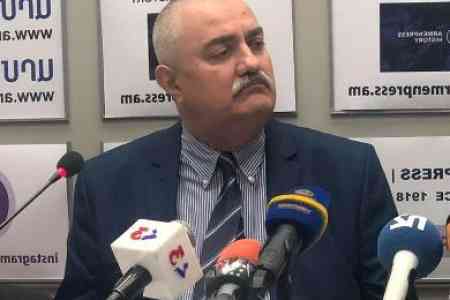 Commenting on the meetings in Sochi and Washington, Mr Safaryan said  that the geopolitical centers are now competing for their roles in  the Nagorno-Karabakh peace process and Armenians should understand if  this competition meets their national interests.

"I am absolutely sure that the fact that the conflicting parties  pledged not to use force is a significant contribution to  stabilization. The Sochi declaration is one more piece of evidence  that Russia-brokered negotiations have no alternative. And we can  state with confidence that Russia has privileged status as mediator  in the settlement process and establishment of regional peace," he  said.

As regards the West's role, Mr Safaryan said that the obvious  competition does not pose a threat to Armenia. Rather, it is a  complement to Armenia foreign policy concept.

"Yes, the mediators are competing for the purpose of enhancing their  roles in the South Caucasus.  However, if after 2020 Armenia has  insisted on the OSCE Minsk Group's further activities as the Nagorno-  Karabakh remains unsettled, how can we push ahead with this concept  without making use of the efforts by the centers of power? We are  grateful to France for the resolution, but we are also aware that no  matter how powerful France is, it by itself cannot oppose the  Turkey-Azerbaijan alliance. On the other hand, the unity of the OSCE  Minsk Group co-chairs - Russia, France and the USA - will held us be  strong and independent in dealing with Azerbaijan," Mr Safaryan said.

Armenia should realize Russia's most weighty role in influencing the  conflicting parties, he added.