Former Deputy FM: Armenia`s refusal of Artsakh`s  right to  self-determination means that it imposes on itself the stigma of an  aggressor 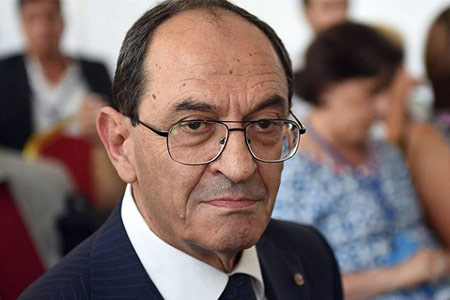 ArmInfo. Armenia's refusal of Artsakh's right to self- determination means that it imposes on itself the stigma of an aggressor, with all its dangerous  consequences. Former Deputy Foreign Minister of Armenia Shavarsh  Kocharyan announced on November 9, at the discussions organized by  the opposition forces.

At the same time, he recalled that the basis of international law is  the UN Charter, which is similar to the Constitution of the state in  the international hierarchy. "That is, if any clause contradicts the  Constitution, then the Constitution must apply. The same rules apply  to the UN Charter. This is important from the point of view that  initially, from the very beginning of the Nagorno-Karabakh conflict,  there were two contradictory positions "Armenian position and  Azerbaijani position. The Armenian side emphasized the right of  peoples to self-determination, while the Azerbaijani side emphasized  territorial integrity," he stated.

"Article 1, paragraph 2 of the UN Charter on the purposes of the  Organization states: "to develop friendly relations among nations  based on respect for the principle of equal rights and  self-determination of peoples, as well as to take other appropriate  measures to strengthen world peace."

Meanwhile, self-determination is already mentioned in the fourth  paragraph of the second article of the Charter, which lists the  principles according to which it is possible to achieve the goals  listed in the first article of the UN Charter: "All Members of the  United Nations shall refrain in their international relations from  the threat or use of force, as against territorial integrity or  political independence of any State, or in any other manner  inconsistent with the Purposes of the United Nations." That is, if we  are again talking about international law, then the principle of  territorial integrity should serve the goal of the right of peoples  to self-determination. That is, at least, it cannot be opposed to  it," Kocharyan stressed.

At the same time, the diplomat emphasized that the refusal of the  state from the principle of the right to self-determination would  have catastrophic consequences for it in a conflict situation.

"There was a conflict, thousands of dead, wounded, destruction - who  is responsible for this? If the problem concerns self-determination,  then it turns out that the aggressor Azerbaijan, which, in response  to the realized right of Artsakh to self-determination, resorted to  power politics. First, this manifested itself in forced deportations,  mass pogroms - Baku, Sumgayit, etc. ,and then turned into a  large-scale military aggression against the self-determined  Nagorno-Karabakh," the former deputy foreign minister of Armenia  noted.   According to him, if we take the territorial dispute as a basis, then  it will be very difficult for Armenia to defend itself from the  stigma of an "aggressor". "If Armenia voluntarily renounces  self-determination, lowers the bar, this is nothing but imposing the  stigma of an aggressor on itself," said Kocharyan.  In this regard,  the diplomat touched upon the consequences of such a development of  events. And it is the following: "The aggressor must be punished."

In this regard, Kocharyan gave examples of punishments applied in  international practice to aggressor countries. "Among the applicable  punishments is the forced expulsion of the population both from the  territory of the affected state and from one's own territory, if it  was transferred to the victim as a punishment. This is the first  measure. The second measure is compensation with the territories, the  third one is reparation," he said, citing the example of Germany  regarding the results of the Second World War as an example of these  points.  At the same time, the diplomat stated that there were no  deadlines for compensation, and it turns out that if you find  yourself in the status of an aggressor, then in fact you remain with  this stigma forever.  Another point he called the restrictions of a  defensive nature, which are imposed on this state. Kocharyan stated  that the army, the military-industrial complex, the sector of arms  procurement, etc. would suffer from this.  "The fifth measure is to  identify and punish war criminals and bring them to justice. The  sixth measure is to control the internal life of the state so that  revanchism does not raise its head," he said.  In conclusion, the  well-known diplomat reiterated that Armenia's refusal of the  principle of the right to self-determination of Artsakh is tantamount  to impose on itself the stigma of an aggressor, and, moreover, "if we  look carefully, we will see that Turkey and Azerbaijan all their  actions lead to attracting Armenia accountable precisely as the  aggressor. And unfortunately, in this process the current authorities  of Armenia assist them".  "The Prime Minister of Armenia, by his  signature under the tripartite statement dated November 9, 2020,  where it is indicated that Armenia is returning territories to  Azerbaijan, assigned the country the status of an aggressor. And now,  this whole story continues in different directions," Kocharyan summed  up.