Being an ally of Turkey, Azerbaijan is de facto becoming NATO`s entry  point to the South Caucasus - Russian expert 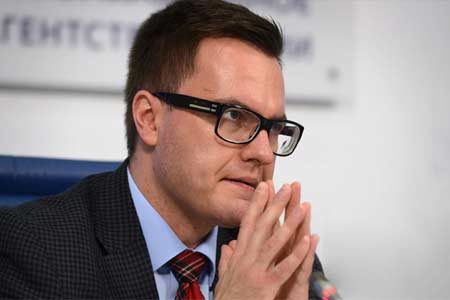 ArmInfo. Russia has leverage on Azerbaijan and Armenia on the implementation of the Sochi agreements of the leaders of the three countries of October 31.

A similar opinion was expressed by Feodor Voitolovsky, Director of the  Primakov Institute of World Economy and International Relations  (IMEMO), Russian Academy of Sciences, Member of the Presidium Council  for Science and Education under the President of the Russian  Federation, referring to the Sochi meeting of the leaders of Armenia,  Azerbaijan and Russia.  At the same time, as the key achievements of  the Sochi meeting, the doctor of political sciences mentioned the  obligations of the parties to refrain from the use of force or the  threat of force, as well as the further activities of the Russian  peacekeeping contingent in Nagorno-Karabakh. At the same time, he  believes that there is no point in expecting breakthroughs from the  Sochi declaration - its very value lies in the fact that the parties  agreed to meet and continue negotiations on acute and painful issues.

To the remark that if Russia has leverage, then how did Azerbaijan  violate the ceasefire, the political scientist admitted that indeed,  such violations took place. Voitolovsky stated that throughout the  entire post-war period, Azerbaijan took a rather tough position,  which was based on the support of Turkey and the tacit support of the  United States. "Yes, yes, precisely on the support of the United  States, because if the United States had actually sanctioned Turkey's  actions during the 44-day war of 2020, then Ankara could not afford  the freedom of action and the support that Baku provided," he said in  an interview with Public Television of Armenia.

When asked whether Azerbaijan could start a war without Russia's  consent, Voitolovsky expressed his conviction that Baku started the  war without Moscow's consent. According to the expert, Russia  received the information, in fact, only on the eve of the start of  hostilities.

He once again stressed that Russia has leverage that works. In this  vein, the expert stated that if these levers did not work, Ilham  Aliyev would not have come to Sochi to talk with Vladimir Putin and  Nikol Pashinyan.  Otherwise, Azerbaijan would not have stopped the  war where it stopped and would have received not only 7 regions  surrounding the Nagorno-Karabakh unrecognized republic, but would  have received the entire territory of the unrecognized NKR and  Stepanakert, and possibly would have gone further. After all, as we  know, Azerbaijan is promoting a very firm position that it can move  further, because the borders are not delimited and not demarcated,"  the political scientist said, recalling that now it is Russia that is  actively proposing to the parties to conduct this process.

At the same time, Voitolovsky drew attention to the fact that, unlike  other draft peace treaties proposed by the EU and the US, the Russian  Federation clearly states its position on the need to recognize the  interests of the people of Nagorno-Karabakh, residents of the  unrecognized NKR. "And Russia has not changed its position in this  case," he remarked. And to the question, what is Russia's position on  Nagorno- Karabakh, Voitolovsky asked a counter question about  Armenia's position on Artsakh. "And what is Armenia's position on  Nagorno-Karabakh? Armenia does not have a clear position. Armenia has  not recognized the independence of Nagorno-Karabakh," he said. And in  response to the journalist's comment that this does not mean that  Armenia does not have a clear position, the Russian expert noted that  Russia does too.

"Russia cannot recognize the independence of Nagorno-Karabakh. But,  in my opinion, without Russia and Armenia, there would be no  Nagorno-Karabakh Republic at all," the political scientist said.

At the same time, he drew attention to the fact that the US position  on this issue is unequivocal since they recognize Azerbaijan's  sovereignty over Nagorno-Karabakh. The Russian Federation has a more  flexible position on this issue. "Russian peacekeepers at the moment  ensure the vital activity, the very existence of the unrecognized  NKR," he said.

The expert did not agree with the statement that the United States  and Russia have a similar position on the issue of Artsakh, namely  that it is Azerbaijani land. He assured that Russia's position is  more complicated, and it says that the issue of the status of the NKR  should be resolved through negotiations and a referendum, which  should be held on the territory of Nagorno-Karabakh, when a peaceful  settlement is reached. "And this is a very serious difference from  the position of the US and the EU," the international expert added.

He once again drew attention to the fact that official Yerevan does  not have a clear position on the issue of Nagorno-Karabakh. "Armenia  did not recognize the independence of the NKR, did not recognize it  as part of its territory. Look, during the 44-day war, Armenian  volunteers, who arrived, including from Russia, participated as part  of the Armenian army, but unofficially. It was not possible to fully  declare the mobilization, and the Armenian leadership did not want to  be drawn into the conflict, because this would no longer mean a  conflict between Nagorno-Karabakh and Azerbaijan, but would mean a  conflict between Armenia and Azerbaijan," Voitolovsky noted.

To the  remark that Russia did not express a clear position in  connection with the Azerbaijani aggression against Armenia, the  expert assured that Moscow will be the only one to show assistance to  Yerevan in that cas Responding to the thesis that the Azerbaijani  Armed Forces did not go further during the September escalation,  because they were stopped by America's position, which Washington  officially announced, Voitolovsky retorted: "What do you think, if  America once supported Turkey and allowed Azerbaijan to act  completely definitely in Nagorno-Karabakh, why is the US suddenly  changing its position now?  After all, Turkey is a loyal member of  the North Atlantic Alliance. Azerbaijan is an ally of Turkey. Being  an ally of Turkey, Azerbaijan is de facto becoming NATO's entry point  to the South Caucasus."

At the same time, he stressed that alliance is a two-way road. "If  before the developments of 2020 and the current developments, Armenia  had taken a clearer position on Crimea, then I believe that the  position of the Russian leadership on Nagorno-Karabakh was much  firmer both in 2020 and now. But, Armenia did not do this. If Armenia  at one time had agreed to cooperation in the field of air and missile  defense, which the Russian side had repeatedly proposed, but it did  not do so. Yes, there is a framework agreement between the parties.  But, it could be filled with real content in terms of arms supplies  and military equipment, and in terms of joint systems," he said.  To  the clarifying question of the presenter about < was the Armenian  side against it?>, the expert answered in the affirmative. " The  Armenian side, both during the previous and current administrations,  but above all, during the previous administration (under Serzh  Sargsyan - ed. note), refused Russian proposals. Therefore, alliance  is a two-way road," the political scientist noted.  He once again  assured that " Russia cares about what happens to Armenia ", and that  is why, it proposes a long, difficult process, where solutions will  be worked out that suit both Yerevan and Baku, while taking into  account the interests and security of the population of Nagorny  Karabakh.