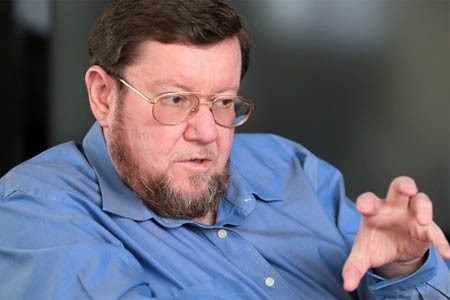 ArmInfo. Not a trace of Armenians would be found in Nagorno-Karabakh now but for the Russian army, Evgeny Satanovsky, Director of the Institute of Near East,  stated in response to the ban on entry to Armenia for Russian MP  Konstantin Zatulin and RT Editor Margarita Simonyan.

"Armenia's incumbent government has banned Konstantin Zatulin and  Margarita Simonyan from entering Armenia. And it is logical as they  are discrediting this government, because it is Nikol Pashinyan and  his team that are guilty of Yerevan's defeat in the second Karabakh  war, losing all that Armenians had won back from Azerbaijanis. But  who would like to hear that? And not a trace of Armenians would be  found in Nagorno-Karabakh now but for the Russian army, to say  nothing of the fact that Armenia could at least have lost Syunik and  no one would be negotiating transit via the Zangezur corridor now.  But who cares?"

According to Mr Satanovsky, the "ex contrario" principle is in effect  here. And it is not only Nikol Pashinyan.

"No officials, especially those having complexes and on the brink of  losing power - if they mess things up and go on doing so (and  Pashinyan is going on as he cares about nothing but his own power. He  will give Karabakh - and not only Karabakh - lock, stock, and barrel)  - like being reminded of that, especially by authorities with  contacts, who are not under these very officials' control. A petty  populist dictator cannot do anything to them, but ban their entry to  the country he, alas, is leading. Yes, it is cheap and nasty, but who  says it can be otherwise in this world?"

Armenia's premier is now faced with formidable tasks his "American  bosses" have assigned. Specifically, it is breaking off relations  with Russia and withdrawing the Russian military base from Gyumri,  Armenia, quarreling with Iran "till the sparks fly" thereby enabling  as many Westerners - from whatever country they may be - as possible  to enter the region.

"Besides, at home he [Pashinyan] has to make concessions - and  extremely significant ones - to Turks.  Recep Erdogan is not going to  miss his chance in the situation Armenia has found itself in, just as  in the case of Georgia and Azerbaijan. Moreover, he has to turn the  Organization of Turkic States (OTS) into a new Ottoman Porte, while  our clumsy bureaucrats are hardly moving, not to prevent his actions,  but only to be squeezed out of the Transcaucasia, Kazakhstan and  Central Asia, losing all that has been gained there for the past 300  years," Mr Satanovsky said.

As regards the Armenian people and economy, which will cease to exist  without Russia, which, according to the expert, is the case in  Ukraine, the Baltic States and Moldova, Armenia's premier "does not  give a damn."

"This is a type. He will feel as good as Volodymyr Zelenskyy, Maia  Sandu and the leaders of the three Baltic States. And the most  important thing is that the Americans he [Armenia's premier] is the  brainchild of will feel good. And they will go on closely supervising  him until they themselves disintegrate, which will certainly happen  only after they do away with the European Union and all that they can  in the post- Soviet area. As regards the grossly unfair entry ban  imposed on Konstantin Zatulin and Margarina Simonyan, the old truth  is: do not do good not to be repaid with evil. Who has their effort  been for? For Armenia and Armenians. Not for Pashinyan!"