We don`t have to choose between the US and Russia, or any other  country - David Babayan 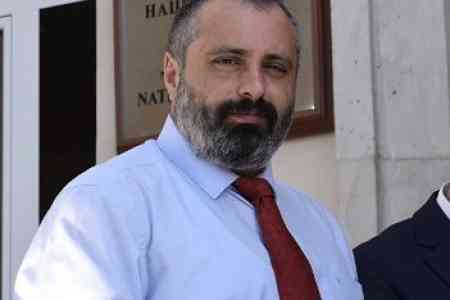 ArmInfo. Foreign Minister of the Republic of Artsakh David Babayan completed a brief visit to the United States at the end of September, accompanied by Lernik Hovhannisyan, Artsakh Deputy Minister of Education, Science, Culture and Sports, and Robert Avetisyan, Artsakh Permanent Representative to the United States and  Canada. During the visit, Babayan visited Washington, D.C. and Los  Angeles, The Armenian Mirror Spectator reports.

Speaking before his return to Artsakh, he said that though some time  was necessary to understand the long- term outcomes of the trip, "in  general, the results are already really positive. We met with local  Armenian compatriots and diasporan organizations. You know that the  Armenia-Artsakh-Diaspora trinity is at the heart of our  state-building process and foreign policy. Within this context, it  was a very important visit because we cemented our ties further and  we think that such contacts are very important, especially taking  into consideration the role of the Armenian-American community in the  development of Artsakh and Armenia, and its active role in defending  our national interests in the US and globally."

In addition to meeting American-Armenians, he said, "The second layer  of the trip was relations with and interactions with US political,  public and analytical circles. We consider this to be very expedient  because we have to understand the current reality and see the reality  as it is, not to look at it with rose-colored spectacles. We need to  know what to expect, what to anticipate."

While Babayan was unwilling to reveal any specifics, proclaiming his  slogan to be "Be quiet, work more," he did say that the trip allowed  explaining the Artsakh position to American circles and pointing out  the destructive policy of Turkey. He said, "We also got a general  impression, and to some extent even precise data - a picture of  possible developments.meetings gave us answers to many, many  questions."

When asked how he interpreted the recent indications of greater US  involvement in the Caucasus, he replied: "Every great country has a  role to play in the region, and they are playing it actually. But  here I would like to underline one crucial point. We don't have to  choose between the US and Russia, or any other country. We don't have  to develop relations with one of them at the expense of the other. It  would be a catastrophe for us, not only geopolitical but internal.  Look, we are a diasporic people. More Armenians live outside our  historic lands than inside."

He continued that with such large Armenian communities in many  countries, we do not want to cause problems for any of them, and  Armenians must maintain unity. He said, "There are only two people  who can afford to keep normal, very close fraternal relations with  many countries which even have problems with each other. They are the  Armenian and Jewish peoples. If we don't do this, it means that we  lack either professionalism or patriotism. We should be very, very  wise here not to become a battlefield of great powers, because we do  not have the resources to even survive in this case."

Aside from maintaining close relations with these countries, he  suggested that there must be some geopolitical "specialization" in  the region. He explained: "For example, we can't envisage the future  of Artsakh without Russian peacekeepers because they are the only  component which can maintain relative peace and stability in the  region and somehow contain Azerbaijan. This is the reality. If there  are no Russian peacekeepers there will be no Artsakh. Consequently,  anybody who is against Russia on the Armenian side, saying bad things  about Russia, is actually doing the same thing against Artsakh and  Armenia."

Similarly, he said that Artsakh would envision strong US involvement  through the containment of Turkey.  He said, "There is only one  country in the world that can still contain Turkey by political  means, and that is the United States. This window of opportunity is  narrowing at a really rapid pace. In 2-3 years, Turkey will be an  independent geopolitical player." He compared Turkey with Hitler's  Germany, tricking both the West and the Soviets, and turning into a  major world danger.

Babayan added that those who consider Russia at fault in the 2020 war  for not saving the Armenians were wrong and were giving the wrong  signals to the Russians. He said, "Who is going to suffer from that?  I don't think that the Azerbaijanis or Turks will suffer. We have to  be really wise. Our country is entering maybe the most difficult  period of its history. I don't think that we have the right or luxury  to target any country."

He concluded that in any case, "In the 2020 war, we were not defeated  by Turks and Azerbaijanis. We were defeated by ourselves."

He stressed, "Artsakh has no future in Azerbaijan. It has only one  future: destruction and genocide. After the destruction of Artsakh,  there will be no Armenia. Do not cherish any hope that it could  somehow guarantee security."

Babayan stressed that as a nation, not only military defense but a  correct foreign policy are necessary.  Meanwhile, he said, "We have  to be both realists and optimists at the same time, because this is  the basis for success. What we have to do now is to recover from this  devastating war, to construct houses and apartments for refugees and  internally displaced people, and to provide jobs. There are some very  large- scale projects taking place in Artsakh, and hundreds of houses  and apartments have already been constructed. The state adopted a  project to finish that in maybe two or three years. After that, the  social situation will somehow be stabilized. But we will also need to  conduct very profound economic reforms in order to accommodate to the  new situation."

He said that the assistance of the entire Armenian nation, in Armenia  and diaspora, was needed for this effort. He  praised in particular  the Hayastan All-Armenian Fund as one of the most organized pan-  Armenian structures. Despite some criticisms of it and difficulties,  he said, "What we have to do is to make it very effective again, and  cement the three parts of the world organization,  Armenia-Artsakh-Diaspora.