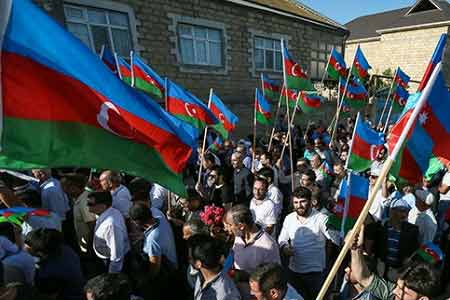 ArmInfo.Activists of the Democracy and Welfare Party held an anti-Russian protest on the territory adjacent to the Russian embassy in Baku, as the police  blocked the way to the building of the Russian diplomatic mission.

According to the Turan news agency, the protesters demanded the  withdrawal of the Russian peacekeeping contingent from  Nagorno-Karabakh.

The protesters raised posters with the inscription: "The occupying  Russian army, leave Karabakh!".  Holding the flags of Azerbaijan and  Ukraine, they chanted: " Occupation troops leave! " and called the  war against Ukraine "genocide." In addition, the demonstrators  accused "the Russian army of committing the so-called Khojaly tragedy  and Bloody January."

Meanwhile, according to the some Azebaijani media, one of the members  of the above-mentioned party, Huseyn Malik, was detained after he  said, "Putin. When you leave, take Ilham with you."

We also add that the protest action takes place against the backdrop  of the visit of Azerbaijani President Ilham Aliyev to the Russian  Federation to participate in an informal meeting of CIS leaders. It  is also worth noting that in Azerbaijan, not a single protest action  takes place without the curation of the authorities.