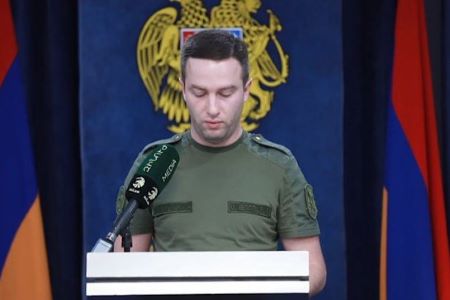 ArmInfo.he Deputy Chief of the General Staff of the Armenian Armed Forces gave a general description of the main task of the Armed Forces of the Republic of  Armenia, which is to protect the sovereign territory of Armenia from  external threats.

There is nothing unusual or new in that statement.  This was stated by press secretary of the Armenian Ministry of  Defense Aram Torosyan, who made an explanation regarding the  statement of the Deputy Chief of the General Staff of the Armenian  Armed Forces Arakel Martikyan that the Armed Forces have the task of  restoring the territorial integrity of Armenia and are obliged to  fulfill the order of the supreme commander.

To clarify, that statement wasn't a hint about any action, Torosyan,  in particular, said: "There is no need to look for any hint  or hidden subtext. Deputy Chief of the General Staff Arakel Martikyan  talked about the main mission of the Armed Forces - the protection of  the sovereign territory of Armenia. At this moment all the diplomatic  tools are put in action for the withdrawal of Azerbaijani units from  Armenia's sovereign territory," he concluded.