Greek Foreign Minister: Solutions and peace cannot be built in  conditions where there is a threat of the use of force 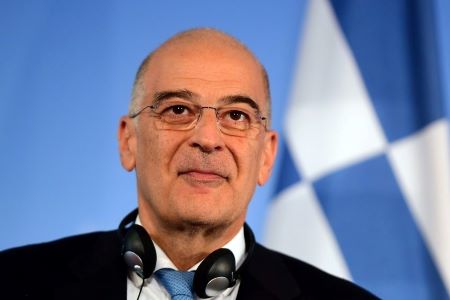 ArmInfo. Greece has repeatedly stressed its support for the sovereignty and independence of all states, and this also applies to our good friends Armenians.  Greek Foreign Minister Nikos Dendias stated this on September 27 in  Yerevan during a briefing with Armenian Foreign Minister Ararat  Mirzoyan, noting that he was glad to be in Armenia again after two  years.

"We believe in the inviolability of borders. And regarding what  happened a few days ago, when the territory of Armenia was shelled by  the Azerbaijani army, I want to quote the words of the French  President Emmanuel Macron, who said yesterday, in particular: "I  condemn what happened and it was directed against peace  negotiations," the Greek minister said.

At the same time, referring to bilateral relations, he highly  appreciated the role of the Armenian and Greek communities in the  development of cooperation.

"I would also like to send a clear message to those countries that  want to redraw the map - the redraw policy will fail. In this regard,  I would like to mention another force that is trying to take  advantage of the current situation and contribute to destabilization.  It is about Turkey. We Greeks are the witness of Turkish rhetoric. "I  must say that Turkey opposed the sending by Athens of a certain  amount of defense weapons to the Greek islands. And this is being  done in conditions when Greece is acting within the framework of its  obligations arising from the Lausanne Agreement," Dendias noted.

At the same time, he drew attention to the fact that Greece does not  leave its territories unprotected, which provokes protest from  Turkey. "And now Turkey is threatening Greece with war by deploying  its navy a few miles from the Aegean islands. We repeated that we are  ready to start a constructive dialogue with Turkey within the  framework of international law, but at the same time we are also  ready to defend our country and our rights,"  Dendias said.

At the same time, he, turning to his Turkish partners, urged don't  misunderstand what he said, and stressed that Greece would do  everything to protect itself and its rights.

"Today we also discussed security challenges in the Caucasus. I look  forward to meeting with Prime Minister Pashinyan and the Minister of  Defense. As for our position on the settlement of the Nagorno-  Karabakh conflict, it is unchanged. We are promoting a peaceful  solution through mutually acceptable compromises and within the  framework of an international right," he said.

At the same time, he added that Greece welcomes the courage of Nikol  Pashinyan, who proposed new approaches for the future of the region,  as Macron said yesterday.

"However, solutions and peace cannot be built in conditions where  there is a threat of the use of force. This applies to both the  Caucasus and the whole world. Greece continued to facilitate the  start of negotiations, and the contribution of the United States and  the EU is significant. We are ready, together with other European  partners, to help as mediators to continue negotiations under the  auspices of the OSCE Minsk Group. We cannot change the geography, but  people should be able to live peacefully side by side," he said,  adding that Greece believes in the urgency of resolving humanitarian  issues. In this vein, he stressed that international humanitarian law  must be respected.

In conclusion, pointing to the exemplary relations between the two  countries, the Greek minister also touched upon the common tragic  pages in the history of the two countries - the Armenian and Pontic  Greek genocides in Ottoman Turkey - and the documents adopted by the  legislative bodies of the Republic of Armenia and Greece in this  regard.

"I also want to express my gratitude to you for your assistance on  the issue of the illegal annexation of a part of the Republic of  Cyprus. And we are looking forward to taking steps to promote our  Armenia- Greece-Cyprus trilateral format and raise it to a  qualitatively new level," Dendias summed up.