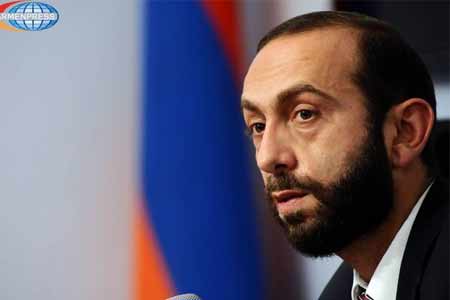 Minister Mirzoyan presented to his colleague the consequences of the  large-scale aggression unleashed by Azerbaijan against the sovereign  territory of Armenia.

Ararat Mirzoyan emphasized the need for targeted statements addressed  to Azerbaijan by international partners and the implementation of  effective steps to prevent new aggressions. In this context, he  particularly highlighted the position expressed by India during the  urgent sessions of the UN Security Council.

Issues related to the normalization of relations between Armenia and  Azerbaijan and the settlement of the Nagorno-Karabakh conflict were  also touched upon.

Ararat Mirzoyan and Subrahmanyam Jaishankar touched upon the  development of Armenian-Indian relations. The Foreign Minister of  Armenia highly appreciated the positions expressed by the Indian side  on issues regarding Armenia on international platforms.

Foreign Ministers discussed issues related to the development of  bilateral relations based on traditional friendly ties, exchanged  views on the prospects of cooperation in areas of mutual interest.

During the meeting, the interlocutors emphasized the role of the  Armenian community of Syria in the development of relations between  Armenia and Syria, stressing that despite the difficulties  experienced during the Syrian crisis, it continues to play the role  of a unique bridge between the two countries.

Ararat Mirzoyan and Faisal al-Mekdad addressed the issues of regional  security and stability, stressing the need to resolve them through  peaceful negotiations and dialogue.

Minister Mirzoyan presented the situation resulting from the  aggression unleashed by Azerbaijan against the sovereignty and  territorial integrity of the Republic of Armenia, highlighting the  importance of establishing stability and security in the region as  well as restraining the aggressor through efficient steps and  relevant mechanisms by the international community.

The Foreign Minister of Armenia also touched upon the normalization  process of Armenia-Turkey relations.

Minister Mirzoyan presented the details of the aggression unleashed  by Azerbaijan against the sovereignty and territorial integrity of  the Republic of Armenia, particularly emphasizing the need for the  immediate withdrawal of the Azerbaijani armed forces from the  sovereign territories of the Republic of Armenia as well as the  elimination of the consequences of the aggression. Referring to the  importance of the international community's appropriate and adequate  response to the maximalist policy of Azerbaijan, Ararat Mirzoyan  highlighted the principled position of the Iranian side regarding the  current situation and its resolution.

Hossein Amir-Abdollahian noted that Iran considers any change of  borders and geopolitical situation in the region inadmissible.  Both  sides emphasized the importance of resolving the issues through  peaceful negotiations.

During the meeting, the Foreign Ministers of the two countries  commended the high level of Armenian- Iranian relations based on  centuries-old friendship. The importance of joint efforts aimed at  enriching the bilateral agenda, especially in the spheres of energy,  information technology, agriculture, tourism, transport, and  infrastructure was highlighted.

On September 24, Foreign Minister of Armenia Ararat Mirzoyan had a  meeting with the United Nations Under-Secretary-General holding the  post of High Representative for the United Nations Alliance of  Civilizations Miguel Angel Moratinos in New York.

Ararat Mirzoyan highlighted the importance of the activities of the  UN Alliance of Civilizations aimed at the harmony between  civilizations, and the promotion of interreligious and intercultural  dialogue.

The Foreign Minister of Armenia touched upon the consequences of  Azerbaijan's recent aggression against the sovereign territory of the  Republic of Armenia, emphasizing the importance of clear condemnation  of the aggressor state by international structures.

Minister Mirzoyan also emphasized the need to preserve the Armenian  cultural and religious heritage in the territories fallen under  Azerbaijani control as a result of the 44-day war. The Armenian side  noted that Azerbaijan's deliberate destruction of the monuments of  Armenian cultural heritage is a challenge not solely for Armenia, but  also for all of humanity.