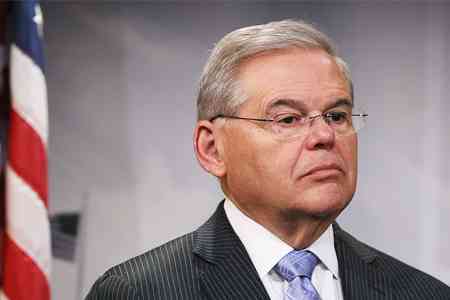 ArmInfo.The Armenian Assembly of America (Assembly) welcomed a letter by Senator Bob  Menendez (D-NJ), Chairman of the Senate Foreign Relations Committee,  to Secretary Antony Blinken, urging the Administration to cut U.S.  assistance to Azerbaijan as a result of its invasion into sovereign  Armenia last week.

Senator Menendez stated that the "unprovoked and illegal attacks,"  which killed over 100 Armenians, highlight the "brutality of the  Aliyev regime" and urged that all security assistance to Azerbaijan  be halted.

"This heinous assault on Armenian territory is only the latest  example in a pattern of Azerbaijani brutality," continued Senator  Menendez, citing the 2020 War on Artsakh launched by Azerbaijan, with  the full and open support of Turkey, against the Armenian people of  Artsakh, which resulted in thousands of deaths, scores displaced and  injured, and close to 200 Armenian prisoners of war still unlawfully  held in captivity by Azerbaijan, including "unlawful killings and  torture by Azerbaijani forces...[the use of] cluster munitions and  phosphorous bombs, and posted videos of beheadings online."

Senator Menendez emphasized the Government Accounting Office's (GAO)  report publicly released earlier this year that proved that the  Department of State and Department of Defense failed to comply with  reporting requirements for reviewing U.S. assistance to the  Government of Azerbaijan in terms of Section 907 of the FREEDOM  Support Act.

"The Assembly commends Senator Menendez and fully supports his letter  to Secretary of State Blinken," said Assembly Executive Director  Bryan Ardouny. "The U.S. must step in to cut off assistance to  Azerbaijan, because the more Aliyev's belligerent actions go  unchecked, the further he will destabilize the region and the  emerging democracy in Armenia will be at grave risk."