Speaker of U.S. House of Representatives condemns "illegal and deadly attacks on the Armenian territory" 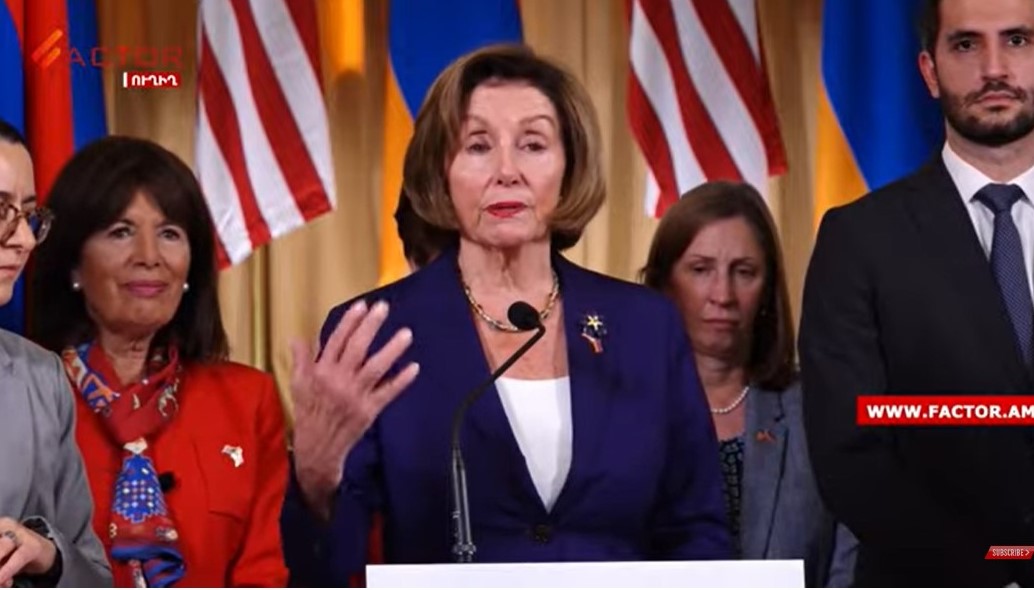 ArmInfo.The speaker of the U.S. House of  Representatives, Nancy Pelosi, accused Azerbaijan of launching  "illegal and deadly attacks on the Armenian territory" as she visited  Yerevan on Sunday just days after border clashes between Armenian and  Azerbaijani forces, Azatutyun reports.

"We in our delegation and on behalf of [the U.S.] Congress strongly  condemn those attacks, which threaten prospects for a much-needed  peace agreement," Pelosi said after talks with Armenian parliament  speaker Alen Simonian.

"We continue to watch the situation closely and we continue to  support a negotiated, comprehensive and sustainable settlement to all  issues related to Nagorno-Karabakh conflict," she told reporters.

Pelosi also effectively blamed Turkey, Azerbaijan's closest ally, for  the fighting that broke out on the Armenian-Azerbaijani border late  on September 12 and left more than 200 soldiers from both sides dead.

"I mentioned in the meeting earlier that for a long time, for  decades, in the Congress and in the bipartisan way we have tried to  hold Turkey as well as Azerbaijan responsible for the  Nagorno-Karabakh conflict," she said.

The U.S. State Department also appears to have held Baku responsible  for the worst escalation of the conflict since the 2020 war in  Karabakh. In a September 13 phone call, Secretary of State Antony  Blinken urged Azerbaijani President Ilham Aliyev to "cease  hostilities" and voiced serious concern over "reported strikes  against settlements and civilian infrastructure inside Armenia."

Speaking at a joint news conference with Pelosi, Simonian said that  the fighting was brought to a halt late on September 14 thanks to  U.S. mediation.

Pelosi's delegation also comprised two other Democratic lawmakers:  Jackie Speier and Anna Eshoo, who both are of Armenian descent. Like  Pelosi, Speier and Eshoo represent California constituencies with  sizable Armenian American populations, a fact emphasized by the House  speaker.

"So this is a family visit for us," said Pelosi. She noted that she  planned the trip "before the assault on the border of Armenia took  place."