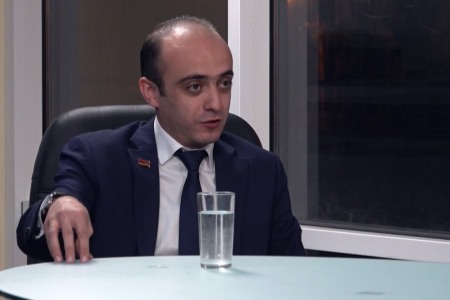 ArmInfo. The entire world is descending into wide-spread chaos amid the turbulent transformation, Taron Dimonyan, a former member of Armenia's Parliament, said in an  interview with ArmInfo.

"And we do not know when this stage is over. However, in the states  with fully-fledged government institutions the population is known to  feel more protected and, therefore, is less disposed to feel chaos.  On the other hand, in Armenia-line countries, which have no  fully-fledge government institutions, controlled chaos is normally  observed - and this chaos is controlled by external forces," he said.

In the context of latest developments in Armenia, Mr Sinomyan said  that controlled chaos is, as a rule, has a specific goal, namely,  causing growing alarm among the population, with morals being the  target. In this context, he points out a need for government  institutions that would unify citizens in Armenia.

He stressed a need for raising public awareness of the ongoing  developments and calling for vigilance instead of incessantly talking  about disturbing trends. Mr Simonyan highlights the importance of an  information security concept with a clear strategy and tactics.

"The country's political leadership needs this concept as well. The  consequences of each word need to be calculated in the intensive  talks with the enemy instead of foreign policy statements made with  domestic political ends in view. The future generations will have to  deal with the consequences.

"The authorities' inert behavior is unacceptable, with people waiting  for further developments only to take all the credit to themselves  and blame external forces and opponents for failures," Mr Simonyan  said.