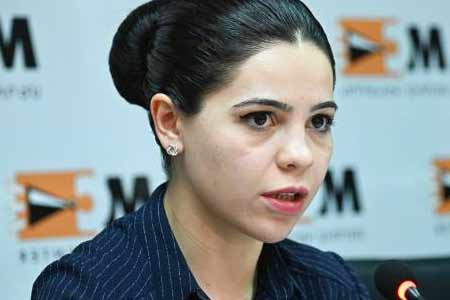 ArmInfo. Azerbaijan's current task is clear: complete de- Armenianization of Artsakh. And  tightening the ring round Artsakh and Berdzor, with the adjacent  villages, is seriously facilitating the implementation of Baku's  plans, expert in Azerbaijani studies Tatevik Hayrapetyan said in an  interview with ArmInfo.

"In this context, I believe that resolving the problem and putting up  barriers to Baku's plans requires extraordinary thinking and  decisions, and, of course, ideologists that would break the chain of  agreements reached behind Armenian society, regardless of who the  parties to the agreements are," she said.

The current trends round Artsakh are obviously unfavorable to the  Armenian people, as the surrender of the Lachin corridor to  Azerbaijan will create serious problems for Armenia-Artsakh  communication, which, in turn, will afford Baku further opportunities  for pressuring Armenia, whereas uncertainty is reigning in Armenia.  The Armenian authorities are cut off from reality, which only  highlights Baku's coherent actions, particularly those of its  propaganda, which is continuing efforts to cause panic in Armenia,  says Ms Hayrapetyan.

Since Baku is aware of its successful propaganda, the expert does not  rule out further military provocations in Artsakh and along the  border with Armenia. And with the Armenian authorities not taking any  reasonable steps to enhance the country's security over the last two  years has only given impetus to Baku's militant rhetoric.

"It is clear that, taken together, all these factors are leaving  Armenia and Artsakh with no alternative but to put up with  Azerbaijan's aggressive policy, though Aliyev goes on casting 'a mist  of peace' before the eyes of the world and mediators. Creeping  warfare is taking place against the Armenian people. And Yerevan's  only response is inaction and fueling uncertainty, which necessitates  proposing ideas and decisions of a new quality for the simple reason  that we cannot continue like this," Mr Hayrapetyan said.