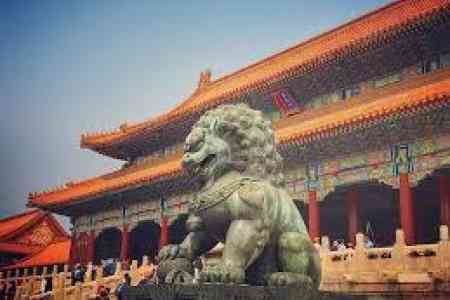 ArmInfo.China hopes that Armenia and Azerbaijan will eliminate differences through political dialogue, and will also comply with the ceasefire agreements reached  following the 44-day war in Karabakh in the fall of 2020. This was  stated on August 8 at a briefing by Chinese Foreign Ministry  Spokesperson, Wang Wenbin, the Xinhua News Agency reports.

In this vein, he recalled that both republics are friendly to China.   "Beijing drew attention to reports of a recent aggravation of the  situation on the Line of Contact in Nagorno-Karabakh," the Chinese  Foreign Ministry noted.

At the same time, Wenbin noted that China calls on Armenia and  Azerbaijan to avoid escalating the situation in the region.  Another  aggravation in the zone of the Nagorno-Karabakh conflict began on the  morning of August 1.  Azerbaijani units do not stop provocations and  ceasefire violations. On August 1, as a result of shelling from the  Azerbaijani side, a soldier of the Artsakh Defense Army was wounded.   And already as a result of the actions of the enemy on August 3, 19  servicemen of the Artsakh Defense Army were injured, two more died.  The enemy used drones and grenade launchers. The goal is to force the  people of Artsakh to leave Berdzor. On August 3, the President of  Artsakh announced a partial mobilization.  And on August 4, at a  government meeting, Prime Minister of Armenia Nikol Pashinyan,  reacting to what is happening, noted that at present the situation  around Nagorno-Karabakh is extremely difficult, but there are also  questions for Russian peacekeepers, who should stop any attempts to  violate the line of contact.  To this, the Kremlin noted that close  contacts between the parties would clarify the situation.