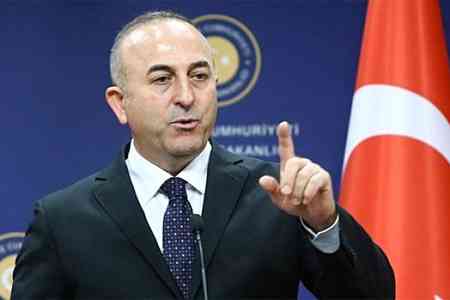 ArmInfo.Ankara continues to threaten Armenia.  Thus, Turkish Foreign Minister Mevlut Cavusoglu, at the opening of the 13th conference of Turkish ambassadors on  August 8 in Ankara, assured that Turkey has been and remains "on the  right side and stands for justice". According to him, this also  applies to the Nagorno-Karabakh conflict.

Then, Cavusoglu cynically stated that in the period after the 44-day  war, Ankara continues its efforts to ensure peace and stability in  the South Caucasus, to create an atmosphere of cooperation.

"We again warn Armenia about the inadmissibility of further  provocations," the Turkish minister said.

"Our country is not an enemy for any country. Everyone who claims the  opposite is biased," the minister stressed, Anadolu reports.

Today Ankara hosted the opening of the 13th conference of Turkish  ambassadors. The conference on the topic: "Wise and benevolent  Turkish diplomacy: in 2023 and beyond" will continue its work during  the week.

The agenda of the conference, among others, includes the efforts of  Turkish diplomacy to resolve crisis situations, including ensuring a  ceasefire between Russia and Ukraine, the topic of the "grain  corridor", processes in the Eastern Mediterranean and NATO.