Back in February 2021, Yerevan conveyed to Moscow its concerns about  possible problems in the activities of the Russian peacekeepers: RA  MFA 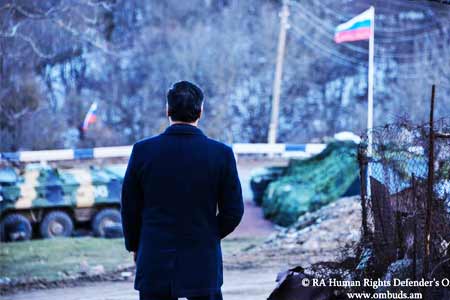 ArmInfo.The Armenian Foreign Ministry reported that back in February 2021, the Armenian side conveyed to the top leadership of the Russian Federation its concerns  about possible problems in the activities of Russian peacekeepers  deployed in Artsakh.

"We inform you that the fears of the Armenian side regarding the need  to increase the effectiveness of the activities of the Russian  peacekeeping contingent and the emergence of possible problems in the  future, in a number of other cases, were conveyed in a written form  to the top leadership of the Russian Federation as early as February  2021," Vahan Hunanyan, the press secretary of the RA MFA, said  answering the questions of the media.

On August 4, at a government meeting, RA Prime Minister Nikol  Pashinyan, referring to the aggravation of the situation on the line  of contact in Nagorno-Karabakh, stated that it is necessary to  clarify the details of the peacekeeping operation in  Nagorno-Karabakh. As the prime minister pointed out, the developments  that have taken place in Nagorno-Karabakh since November 2020,  including the recent ones, raise questions in the Armenian society  related to the content and essence of the peacekeeping mission. "On  December 11, 2020, Azerbaijan captured the villages of Khtsaberd and  Hin Tagher, capturing Armenian soldiers in the presence and  connivance of Russian soldiers. On March 24, 2022, the village of  Parukh was captured - again in the presence of Russian peacekeepers.  The ongoing and intensifying ceasefire violations along the line of  contact, the use of methods of physical and psychological  intimidation of Artsakh Armenians in the presence of peacekeepers are  simply unacceptable", the head of the Armenian Cabinet said.

The next day, Russian Foreign Minister Sergei Lavrov stated that  Moscow "did not see any specific proposals that the Prime Minister of  Armenia wants to make for discussion in the context of the Russian  peacekeeping operation in Nagorno-Karabakh."