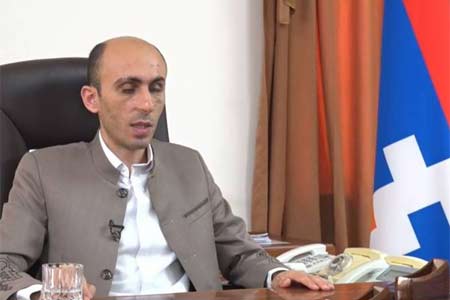 ArmInfo. State Minister of the Republic of Artsakh Artak Beglaryan wonders why, in the context of the provocative actions and attacks carried out by Azerbaijan against  Artsakh and Artsakh Armenians since early August, international  institutions continue to maintain artificial parity in their calls to  the Azerbaijani and Armenian sides.

"I wonder why international institutions and leaders again keep  artificial parity between Azerbaijani and Armenian sides in their  recent calls, if it's Baku launching military provocations recorded  by AZ MoD and Russian peacekeepers. Such parity brings false  legitimization of use of force," he wrote on Twitter.

The situation on the line of contact in Nagorno-Karabakh has  escalated since August 1. On August 3, in the morning, the  Azerbaijani Armed Forces fired at the combat positions of the Artsakh  Defense Army and the place of permanent deployment of one of the  military units, using mortars, grenade launchers and attack UAVs, as  a result of which two contract soldiers were killed and 19 soldiers  were injured. On August 3, Artsakh President Arayik Harutyunyan  announced a partial military mobilization.