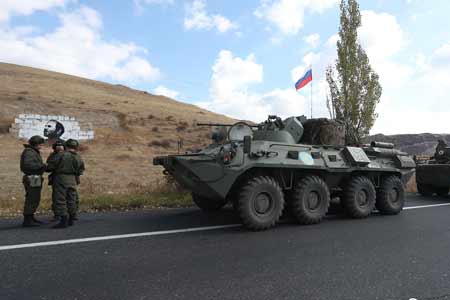 ArmInfo.Russia's Defense Ministry accused the Azerbaijani army of violating the ceasefire in Nagorno-Karabakh after deadly fighting that broke out there on  Wednesday morning, Azatutyun reports.

A statement posted on the ministry's website noted the "escalation of  the situation in the zone of responsibility" of Russian peacekeepers  stationed in Karabakh.

"In the area of the Sarybaba hill, the ceasefire regime was violated  by the armed forces of Azerbaijan," read the statement. "The command  of the Russian peacekeeping contingent, together with representatives  of the Azerbaijani and Armenian sides, is taking measures to  stabilize the situation."

The Russian peacekeepers reported three instances of ceasefire  violation by Azerbaijan on Monday. The report was followed by a phone  call between Russia's Defense Minister Sergei Shoigu and his  Azerbaijani counterpart Zakir Hasanov.