If we give in to emotions, the result will be a social tragedy-  Pashinyan 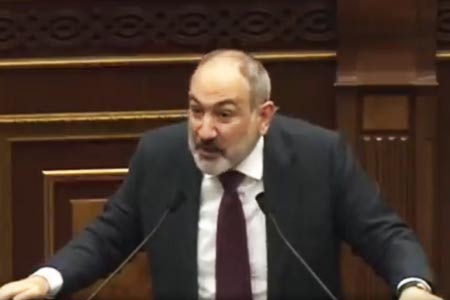 ArmInfo. It is very difficult to overestimate the importance of the prosecutor's office as a state institution in the institutionalization of the state and ensuring  legal security.  RA Prime Minister Nikol Pashinyan stated this on  July 1 at a solemn meeting dedicated to the 104th anniversary of the  formation of the Prosecutor's Office and the Day of the Prosecutor's  Office, the press service of the government reports.

During the meeting, which was also attended by Acting Prosecutor  General Artur Davtyan, newly elected RA Prosecutor General Anna  Vardapetyan and representatives of the Prosecutor's Office, the head  of the Armenian government stressed that the Prosecutor General's  Office is perceived as the pinnacle, the culmination of the  preliminary investigation. <And I should emphasize the importance of  this role, because the other bodies involved in the preliminary  investigation, in fact, mostly operate behind the scenes, and the  prosecutor's office is the body that accepts the formed accusation  and defends this accusation in court, most often in open court  hearings. And if the prosecutor's office referred the accusation to  the court, it means that this accusation should be crowned with a  specific punishment, a specific verdict>, Pashinyan emphasized.

He noticed that behind every criminal case there are people, a human,  family tragedy. <But I want to emphasize the importance of this fact.   It is very important to be able to fundamentally, faithfully and  consistently follow the law in the presence of all these emotional  factors. Because if we give in to emotions over each of the human  tragedies, the result will be a public tragedy>, the Prime Minister  emphasized.

At the same time, Pashinyan noted that the principle of the  inevitability of punishment is the most important factor in the  formation of the state. <A few unpunished cases will indirectly or  directly and unfairly affect others. And in this regard, I want to  emphasize that yes, the prosecutor's office was established as an  institution, but I really like the idea that the law, as well as  criminal law, is an evolving process, and we must definitely follow  this, comply with this process and be able to comply the requirements  of the time. And we are following this path>, the head of government  emphasized.

Speaking about the statistics of arrests presented by the Prosecutor  General's Office, the prime minister pointed to half-empty prisons as  an important achievement. "But at the same time, we recorded that it  is difficult to conduct a preliminary investigation in Armenia if the  accused is not detained. When talking about the development of law  and legal thought, the most important criterion for me is the  effectiveness of the investigation, and, as a result, the  inevitability of punishment, in conditions where the accused is not  in custody. This is, of course, the most important question in my  layman's opinion, when it is possible to conduct an investigation  while the accused is at large as effectively as in the case of his  detention. Of course, it is clear that there are cases when the  arrest directly follows from the interests and the need for a  preliminary investigation. I give this example in order to emphasize  the direction in which we are moving today, including the government,  which bears the main responsibility for the policy being developed  and implemented," Pashinyan said.

The head of government also stressed the importance of the  anti-corruption fight and the effectiveness of the public  administration system. "We talk a lot about the fight against  corruption, which is of political importance to us, including in  terms of increasing the strength and effectiveness of the fight  against corruption in the law enforcement system. It is extremely  important for us to strengthen the law enforcement system as a whole,  as well as social guarantees for prosecutors, because this is a  really important factor. The point is not at all in mercantile or  material interests, but in the fact that we must give the  investigator, prosecutor, policeman and, in general, all employees of  state institutions the opportunity to focus on their work. Social  security, from my point of view, is to allow, first of all, to focus  on work. Of course, this issue is always at the center of our  attention, and we must consistently be able to follow this path. Why  are our wages so low? Because the state, due to circumstances known  to you and to us, is often unable to consolidate the resources of the  entire state, which should be concentrated in the state budget. In  other words, if we talk about corruption, they are a brake that does  not allow funds that should be concentrated in the state budget to be  concentrated in the state budget. Therefore, the fight against  corruption is the most important way to generate the necessary funds  to support our public spending, including the social security system  of the state and the law enforcement system>, the Prime Minister  stressed.

He also pointed out the need to improve the efficiency of the public  administration system. "Of course, the prosecutor's office in this  sense is perhaps one of the most compact state institutions, but one  must take into account the overall efficiency of work. Although in  many cases, including in the work of individual divisions of the  prosecutor's office, we see that sometimes there is a need to attract  new resources, for example, in the process of preliminary  investigation. Because when we talk about an increase in the number  of criminal cases, we often forget that the same number of people  with the same salary investigate this volume or deal with this volume  of cases.

I say all this in order to record that we are clearly aware of the  existing agenda, and the solution of this agenda is, of course, a  priority for us. I should repeat that all the problems that we have  are related to the degree of development of our state institutions.  Where we have a shortcoming, we must look for this shortcoming in all  state institutions, from the army, armed forces and ending with  ministries, departments and local governments. And, of course, the  basis of all this must be sought in education and the education  system, starting with primary, general, higher and postgraduate  education>, Pashinyan stressed.

It should be noted that on the occasion of the Day of the  Prosecutor's Office, by the decree of the President of Armenia, a  number of employees of the Prosecutor's Office were awarded state  awards for their contribution to strengthening law and order, which  were presented to them by Prime Minister Nikol Pashinyan.