Opposition holds rally due to shooting in Aragatsotn 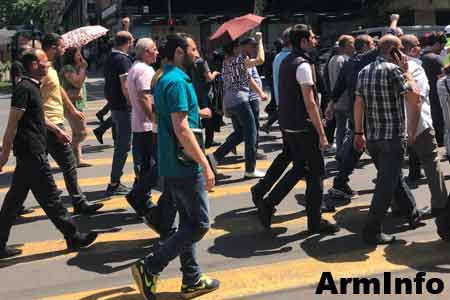 ArmInfo.The opposition is holding its next rally - this time connected with the shooting that took place yesterday in Aragatsotn. The participants of the protest  march went to the office of the "Civil Contract" party, and the next  stopping points, as it was announced, would be the RA Police and the  National Security Service.

Participants of the protest movement poured red paint on the street  near the building of the ruling party, leaving toy guns.

Earlier, last night, as a result of a shootout, 1 person died and 6  were injured in the village of Nigavan, Aoragatsotn region. A  criminal case has been opened on the fact of murder and illegal  possession and carrying of weapons.  It should be noted that the  media disseminated information that the participants in yesterday's  fatal incident are relatives of one of the representatives of the  ruling party. However, the "Civil Contract" refutes this information.