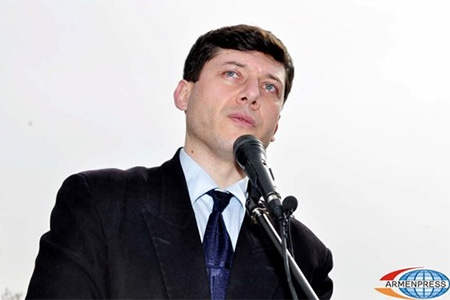 ArmInfo.The EU mediation in the Armenian-Azerbaijani border process and unblocking of regional transport links could seriously weaken Russia's positions in the  South Caucasus - primarily due to Moscow's attempts to use these  "geopolitical tracks" for pressurizing Armenia and Azerbaijan,  political analyst Hovsep Khurshudyan said in an interview with  ArmInfo.

"Specifically, in the border delimitation process, the parties will  be bargaining for each position with Russia, which will provide the  relevant maps and, therefore, will set its own requirements for each  of the positions. Moscow is planning to defend its own interests in a  similar way in dealing with the issue of unblocking transport links,  which process implies Russian convoy of Azerbaijani cargoes via  Armenia, with Armenia itself not at all being interest in it," he  said.

Brussels' current steps to intensify its mediation efforts at the two  issues on the Armenian-Azerbaijani agenda are diminishing the  prospects for Russian plans as, if successful, the processes will  continue in line with international norms and previously prepared  groundwork - for example, under the OSCE procedures.  This is the  reason for Moscow's concern over obtaining a political and economic  lever in the South Caucasus as mediation in the rapprochement between  Armenia and Azerbaijan.

As regards Moscow's attempt to boost the notorious 3+3 format or  rather the 3+2 format, as Georgia refused to participate, Mr  Khurshudyan said that it is a reflection of the geopolitical  processes with the West's participation. According to him, Russia has  recalled the idea for the only purpose of preventing the West's  incipient advance to the region, while Moscow is not viewing the 3+3  member Turkey as part of the West despite its being a NATO  member-state.

"We should forget myths and theoretical threats, but try to analyze  the situation without proceeding from them or from the past, but  rather from the geopolitical reality. And the reality is that Turkey  dos not consider itself the West, preferring maneuvers in its  relations with the West and Russia only to grab something to itself.  This is the reason for Turkey's concern over the prospects of  Russia's defeat in its war against the 'Collective West' in Ukraine,  after which the West could establish control over the South Caucasus,  which would prove to be a blow to Ankara's positions and room for  maneuvering," he said.

By confronting the West or trying to pressurize it over some issues  or others Turkey has always relied on Russia. And now, amid the  prospective disappearance of "a powerful Russia" as Turkey is used to  viewing it, Turkey will have no one to rely on in bargaining with the  West. So Recep Erdogan will have to obey international rules, which  is not at all in his interests arousing his grave concern.