Forecast: Supplies of Russian weapons to Armenia will continue 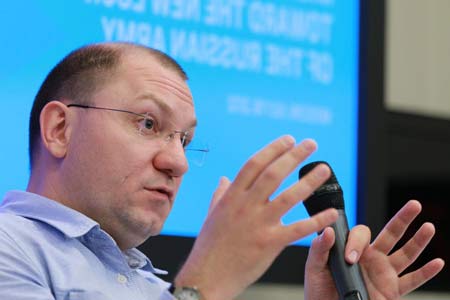 ArmInfo. One way or another, but the supply of Russian weapons to Armenia will continue. Director of the Centre for Analysis of Strategies and Technologies (CAST) Ruslan  Pukhov expressed a similar opinion to ArmInfo.

"Armenia is of strategic importance for the Russian Federation on our  southern borders. And it should be noted that in parallel with the  Turkish strengthening in the South Caucasus and nearby regions, both  the importance and the role of Armenia are increasing. Moreover, the  geographical location of Armenia allows, if necessary, joint  Russian-Armenian military pressure on Turkey. This gives Yerevan the  status of an extremely important and irreplaceable ally in the eyes  of Moscow," the expert is convinced.

Among the expected difficulties with the supply of Russian weapons,  Pukhov singled out the West's campaign to block, squeeze the Russian  Federation out of a number of international formats. According to his  forecasts, this will inevitably affect Moscow's military-technical  cooperation with partners, as a result of which, in the end, the West  will be able to oust Russia from some arms sales markets. As a  result, the Russian military-industrial complex will no longer be  able to bring in $15 billion annually.

"And, of course, additional difficulties with the supply of Russian  weapons to allied countries are caused by the delay in our special  military operation in Ukraine. We now have significant losses in  people and equipment there, which will need to be replenished. It is  clear that this factor will also have a negative impact on supplies  for frontier, including to allies. Moreover, both in terms of time  and in prices, which will inevitably increase," the expert forecasts.

Nevertheless, the role and geopolitical significance of Armenia for  the Russian Federation mentioned above, according to Pukhov, leave no  other alternative for Moscow but to continue deliveries of military-  industrial complex products necessary for Yerevan. In this light,  despite all the objective difficulties, the supply of weapons  necessary to strengthen the Armenian Armed Forces will continue,  including by pushing Russia's own needs into the background.