Forecast: The current turbulence in Armenia may continue for a long  time, without posing a threat to the authorities 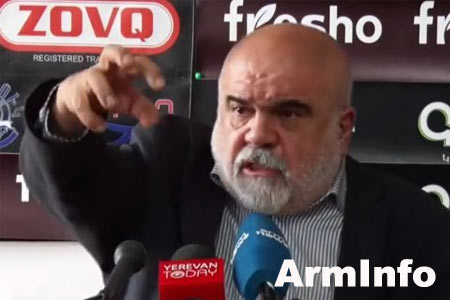 ArmInfo.The current internal political turbulence in Armenia may continue for quite a long time, without posing a threat to the current government. Director of the  Caucasus Institute Alexander Iskandaryan expressed a similar opinion  to ArmInfo.

"The situation is such that now the ruling party in the Armenian  parliament has every opportunity to make decisions alone, on its own.  Under such conditions, the opposition can only criticize these  decisions, since it cannot participate in their adoption due to its  small number. "Which leaves no alternative but to express its  dissatisfaction in the street," he said.," he said.  Noting that the  opposition has resources at its disposal for the time being to  maintain the current activity of the protest movement, the political  scientist emphasized the lack of prospects for its build-up. He  explains the latter by the presence of the largest social stratum in  Armenian society, which does not trust either the government or the  opposition.

According to the political scientist, this layer is in political  apathy and is simply not going to participate in rallies. Moreover,  no longer wanting to vote for Nikol Pashinyan, all these do not  support Robert Kocharyan or Serzh Sargsyanat all. Which serve as a  scarecrow for the current government to intimidate the population  with the very prospect of their return. Even more distrust of society  is strengthened by the opposition itself by the lack of voicing its  program in the event of the hypothetical removal of Pashinyan from  power.

"Thus, the current situation in the domestic political arena can be  compared with the pre-revolutionary situation - weak government, weak  opposition. Yes, the current street actions are very similar to those  that were before the spring of 2018. But then the reasons were mainly  socio-economic problems, while now, there are simply demands for the  removal of the ruling power from power. The latter simply waits for  the protests to subside on their own or begin to annoy people. And  everyone else is just watching what is happening from the side. It is  clear that under such conditions, the protest movement cannot create  risks for the authorities in the short and medium term," Iskandaryan  forecasts.