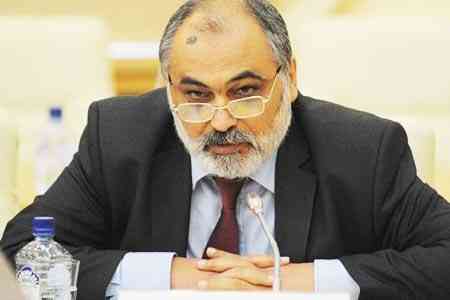 ArmInfo. No doubt, Baku, supported by Ankara, will try to de jure cement the results of its aggression against Artsakh, expert in Turkic studies, Professor Ruben Safrastyan said in an interview with ArmInfo.

"In question is the Artsakh territory occupied as a result of the  44-day war and Artsakh's final status. I think that in the context of  the discussions on Artsakh's final status launched on various  international platforms Azerbaijan will not be able to settle the  issue 'at one stroke' as it sees fit, much as I would like to," the  expert said.

As regards Azerbaijan's desire to establish control over of the rest  Armenian territories of Artsakh and de- Armenianize them by  committing one more genocide there, Mr Safrastyan stressed that  Aliyev will not be able to accomplish his task in the near future,  including due to Russian peacekeepers' presence there and  international discussions on possible specification of Artsakh's  future status. And that will incite Aliyev to realize his plans  step-by-step.

In its turn, Turkey will seek to use its influence and involvement in  such international formats as 2+3, including for the purpose of  assisting Azerbaijan in solving the Artsakh in Baku's favor. And  Ankara's main goal has since 1991 been extending its influence over  the entire South Caucasus, the professor said.

"I would note that Armenia's defeat opened up new and favorable  opportunities for Turkey to achieve this goal by exerting more  intense pressure on Armenia by means of Azerbaijan. Ankara is  disguising its expansionist designs with talks of peace, cooperation  and conflict settlement. This is Turkey's geopolitics," Mr Safrastyan  said.