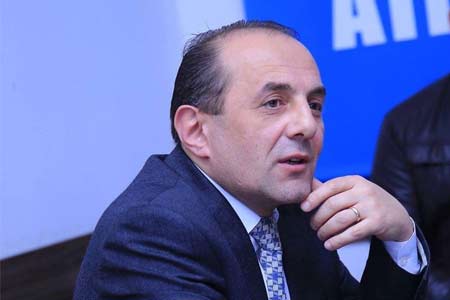 ArmInfo. The unprovoked murder of the Armenian serviceman on duty on the Armenian-Azerbaijani border is evidence that it is murders that remain the "trump card" or, in other words, political creed of Azerbaijani President Ilham Aliyev, Ruben  Mehrabyan, an expert at the Armenian Institute of International and  Security Affairs (AIISA), said in an interview with ArmInfo.

On May 28, in Armenia's Syunik, Armenian serviceman David Vardanyan  was mortally wounded by an Azerbaijani sniper.

"The war is over. Various aspects have been selected, with a peace  process underway. But we see Aliyev goes on sponsoring fire and  murders. And he will spare no effort to continue firing and  murdering.  Otherwise, he will lose his hobby, namely, jingoism based  on hatred for all that is Armenian - a ground regularly 'fertilized'  with cross-border murders. The Aliyev regime will lose its comfort  zone, the very purport of its existence. The concept of the enemy,  namely, the Armenians that must be murdered, remains the fundament of  the Aliyev dynastic regime," Mr Mehrabyan said.

With normal developments, the "Brussels-3 results" should have served  a basis for the Armenian- Azerbaijani relations to take a more or  less predictable course. But that never happened for the simple  reason that even if the negotiations inch ahead, it means for Aliyev  to lose his comfort zone inch by inch.

"All this makes it crucially important to hold Aliyev responsible for  being violently inclined to murders.  Armenia must expose the links  between the murders of Armenian servicemen and their political cost,  making the exposures available to the public inside Armenia first of  all. That among other things would be a step toward diversifying  Armenia's foreign policy. It is not going to be an easy task. Rather,  it is going to be a hard and subtle game. But the most important  thing is that Armenia has the trump cards it has to play in the right  way now," Mr Mehrabyan said.