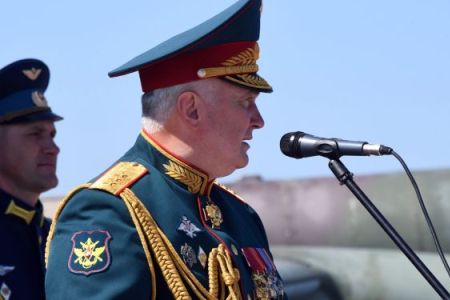 ArmInfo. It cannot be ruled out that the peacekeeping forces of the Collective Security Treaty Organization (CSTO) may be used in the "liberated territories" of  Ukraine and in the republics of Donbass, Andrei Kartapolov, head of  the Russian State Duma Defense Committee, told reporters.

The meeting of the Council of the CSTO Parliamentary Assembly will be  held in Yerevan on Monday.  Speaker of the State Duma of the Russian  Federation, Chairman of the CSTO PA Vyacheslav Volodin will conduct  it. The event is attended by a delegation of deputies of the State  Duma.

"It cannot be ruled out that there will be a need of peacekeepers  from the CSTO countries and in the "liberated territories" of  Ukraine, the Donetsk and Lugansk People's Republics," Kartapolov told  reporters, RIA Novosti reports.

As Kartapolov added, " We can hardly agree that some some NATO  countries under the guise of peacekeepers will try to get in there."  The politician stressed that the CSTO peacekeeping mission is in  demand. He gave an example of the fulfillment of tasks by the  peacekeeping mission of the Russian Federation in Nagorno-Karabakh,  and also recalled the involvement of peacekeepers during the January  developments in Kazakhstan.

Speaking about a single legal space to ensure the activities of the  CSTO peacekeeping forces, Kartapolov added that parliamentarians are  working on special modal laws. "These are laws that are very similar  and the right to apply them on the territories of all states (CSTO  members - ed. note) with equal consequences for all," the head of the  RF State Duma Committee concluded.

According to the Ministry of Defense of the Russian Federation, the  main goal of the operation is the "liberation of Donbass". During the  special operation, the Russian military reported taking control of  the Kherson region and the Azov part of the Zaporozhye region in  southern Ukraine. Civil-military administrations have been formed in  the regions, Russian TV channels and radio stations have begun  broadcasting, and trade ties with Crimea are being restored. The  "liberated" regions announced plans to become part of the Russian  Federation.