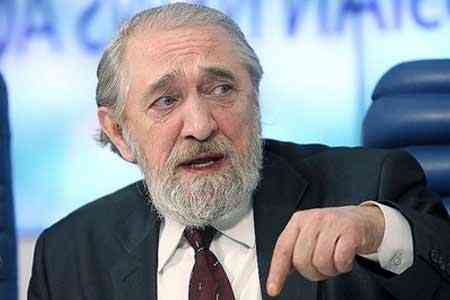 ArmInfo.Yerevan is in vain relying on Washington for Ankara unblocking the borders, Viktor Nadein-Raevsky, Researcher of the Institute of World Economy and  International Relations (IMEMO), said in an interview with ArmInfo.

"No doubt, the United States is attentive to the Armenian-Turkish  process. Another question is that Turkey is not at all a state under  the U.S. overwhelming influence despite its being a NATO member and  its other ties with the United States. In this context, I do not  think the Armenian leadership's hopes are in line with the reality  and trends inside Turkey, and one of the reasons is that Turkey is  coordinating its policy toward Armenia with Baku," he said.

Ankara is not expected to make independent steps toward Armenia  without preconditions at least until the process of signing of an  Armenian-Azerbaijan peace agreement shows progress, and Azerbaijan is  clearly stating it is holding great expectations, Mr Nadein-Raevsky  said.

For Azerbaijan, any Armenian-Turkish negotiations and Ankara's steps  toward Yerevan are instruments for ensuring progress in its own  negotiations with Armenia, especially with Turkey itself not  expecting any preferences from normalizing its relations with  Armenia. So Turkey has no need to hurry.

"The result is the present uncertainty over the prospects for  normalization of Armenian-Azerbaijani relations. See, the process has  been continuing for nearly six months, with three meetings of the  Special Envoys. But even experts and analysts do not know anything  about the results - to say nothing of the public. Moreover, to create  an atmosphere of confidence, Yerevan is not voicing any of its  demands to remedy historical injustice. In its turn, Ankara is  dragging time in Baku's interests and can, in necessary, put forward  its own preconditions at any moment," Mr Nadein-Raevsky said.