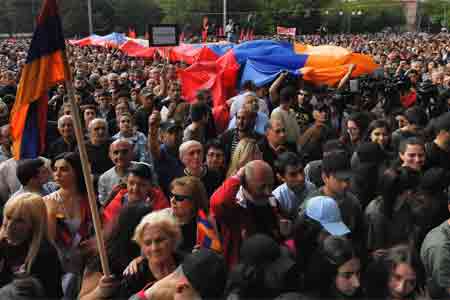 ArmInfo.Supporters of the Resistance Movement, demanding the resignation of current Prime Minister of the Republic of Armenia Nikol Pashinyan, blocked the  Yerevan- Sevan interregional highway near the city of Charentsavan.

Police forces are trying to restore traffic on the highway, which is  one of the largest in the country. Law enforcement officers use brute  force against peaceful participants in the protest action.

It should be noted that the coordinator of the Resistance Movement,  vice-speaker of the parliament from the opposition faction "Armenia"  Ishkhan Saghatelyan at a rally on the evening of May 26 said that on  May 27 the Movement will continue actions of disobedience, including  in the regions of Armenia. "There will be no rally on May 27. On May  28, at 18:00, a nationwide rally will be held. At 16:00, a large  march from Sardarapat to France Square will take place.  A parallel  rally will be held in Stepanakert as well. May 28 is a symbolic day  for our people and state. The situation is fatal. "Take to the  streets, we will unite and expel them," the oppositionist said.  He  also noted that either the authorities will take part in an  extraordinary meeting of the parliament on June 3 and justify that  Artsakh should become part of Azerbaijan, or they will sign the  opposition's statement.