Zakharova: A team of Russian experts has been formed to provide  advisory assistance in the delimitation of the Armenian-Azerbaijani  border 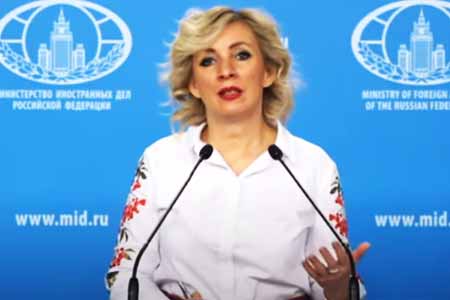 ArmInfo.A team of Russian experts has been formed to provide advisory assistance in the delimitation of the Armenian-Azerbaijani border. Official  representative of the Russian Foreign Ministry, Maria Zakharova,  announced this on May 25 during a weekly briefing.

"We have repeatedly said that Russia is ready to provide advisory  assistance to the work of the bilateral commission on the  delimitation of the Armenian-Azerbaijani border. This, by the way,  was recorded in the trilateral statement of the leaders of Armenia,  Azerbaijan and Russia on the results of the Sochi summit of November  26, 2021 and was repeatedly confirmed in during all contacts,"  Zakharova said.

At the same time, she drew attention to the fact that Russia has a  unique expert potential in the field of delimitation and settlement  of border disputes in the post-Soviet space.  "Of course, we have at  our disposal the necessary cartographic materials and will be happy  to share our experience and developments with Armenian and  Azerbaijani friends as part of the commission's activities,"  Zakharova concluded.

It should be noted that on May 24, within the framework of the  implementation of the agreements reached between Armenia and  Azerbaijan and on the basis of relevant orders, the first meeting of  the Deputy Prime Minister of Armenia Mher Grigoryan and the Deputy  Prime Minister of Azerbaijan Shahin Mustafayev took place on the  Armenian-Azerbaijani interstate border in the format of joint work of  commissions on delimitation and security of the border between the RA  and the AR. According to the RA MFA, the parties reaffirmed their  readiness to work within the framework of the Commissions on  delimitation and other relevant issues, including ensuring security  at the border. Organizational and procedural issues of joint  activities of the Commissions were also discussed. Along with  meetings at the interstate border, the parties agreed on the  advisability of using various venues for subsequent meetings. In  particular, we agreed to hold a second meeting in Moscow and a third  meeting in Brussels.

Today, Russian Deputy Foreign Minister Andrey Rudenko told reporters  that the second meeting of the commissions of Armenia and Azerbaijan  on border delimitation will be held in Moscow next week.  Meanwhile,  Mher Grigoryan's office expressed the hope that such a meeting would  take place next week in Moscow. The office noted that the date is  still uncertain.