Signing of any document is not planned in Brussels: Armenian Security  Council Secretary 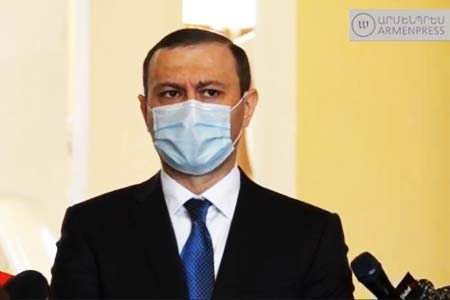 ArmInfo.Armenian Prime Minister Nikol Pashinyan, Azerbaijani President Ilham Aliyev and President of the European Council Charles Michel are not planning to sign any document at their upcoming trilateral meeting in Brussels, the  Secretary of the Security Council of Armenia Armen Grigoryan said in  response to a query from Armenpress news agency.

The Secretary of the RA Security Council also touched upon the  criticism that the agenda of the meeting is classified. "That's to  say the least a strange criticism because the current agenda of our  discussions with Azerbaijan is well known. These are: the points  presented by us and by Azerbaijan for the normalization of relations  or launch of peace talks, which are also disclosed and include the  topic of the NK conflict settlement, issues of return of captives and  revealing the fate of those missing, issues relating to opening of  regional connections, delimitation and demarcation of borders, as  well as issues relating to the launch of the work of the trilateral  commission dealing with border security. This is the same agenda that  was discussed during the previous meetings."

Armen Grigoryan stated that there are no plans to sign any document  in Brussels, because, for example in the issue of opening regional  connections a working group co-chaired by deputy prime ministers is  active and discussions on agreements reached on the highest level  must continue in that format. "The same can be said on the other  issues which are being discussed more in detail in working formats.  Therefore, no document is planned to be signed in Brussels.  Presumably there will be a press release on the results of the  discussions," he pointed out.