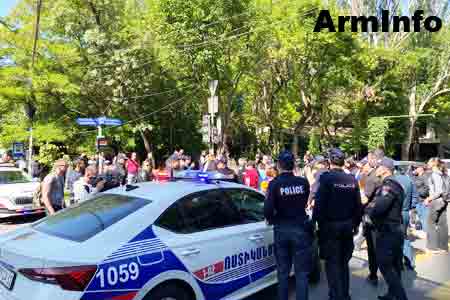 The MPs stated their intention to present the real democracy  situation in Armenia.

After talking to law-enforcers the opposition MPs could enter the  hotel, but they were not allowed to enter the assembly hall. The  law-enforcers did not let reporters in either.

Resistance Movement members are now in front of the hotel. Police  force is present in Republic Square.

Earlier the Resistance Movement held a march from France Square to  the residence of Armenia's president at Baghramyan Avenue 26, where  the Armenian and Lithuanian presidents were meeting.

The participants are holding banners reading "R.I.P. Democracy in  Armenia", "Silence in a Crime" and so on, as well as the photos of  the policemen that used disproportionate force against the  protesters.