Forecast: Russia`s geopolitical weakening and the resulting vacuum in  the South Caucasus will try to fill other centers of power 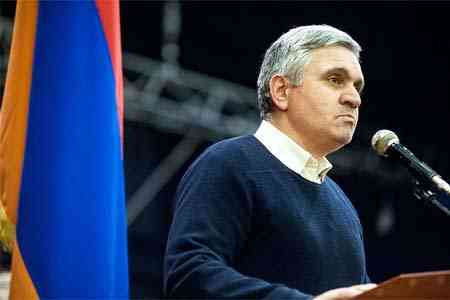 ArmInfo.Russia's objective geopolitical weakening and the resulting vacuum in the South Caucasus will undoubtedly try to fill other centers of power. National  security expert Hrachya Arzumanyan expressed a similar opinion to  ArmInfo.

In his opinion, these geopolitical realities now pose a task for  Yerevan to choose the forces capable of deterring Turkey's potential  aggression against Armenia, in the conditions mentioned above, the  objective weakening of the Russian Federation and the inability of  the Armenian Armed Forces to solve tasks of this level, at least in  the coming years.

In this light, the expert considers that even if Moscow suddenly  decides to solve this problem, then its strategic alliance with  Ankara will inevitably get in the way. Not to mention the fact that  after the Ukrainian war, the Russian Federation may simply not be  able to do this. And here the question arises of who can replace the  Russian Federation as a deterrent to the Turkish threat, the issue,  which, according to the expert, is not addressed by Armenian politics  and diplomacy.

Moreover, in Arzumanyan's opinion, the lack of trust in the current  Armenian government as a whole leaves no way to trust the documents  it signs. Especially considering that these documents, as a rule, are  supplemented by verbal agreements, about which nothing is known not  only to the public, but also to the expert and analytical community  as a whole.

"And now, the parliamentary opposition launched a street struggle for  power in this situation, in which Artsakh continues to be occupied. A  struggle in which there is not only a strategy and policy, but also  real concern for the future of this very Artsakh. These people have  lost power and now they are just trying to regain it. And it's all.  While in the current situation, the first task of all political  forces is to restore the country after a 44-day catastrophe. First of  all, the restoration of the army, the formation of a fundamentally  new system of defense and security," Arzumanyan summed up.