Ukrainian Forum to assist Ukrainian refugees was opened in Yerevan 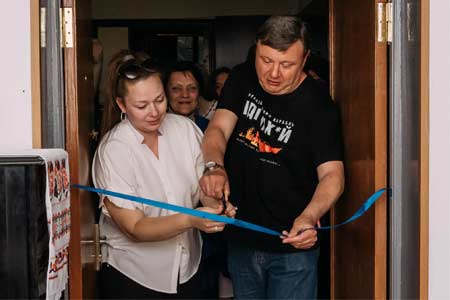 ArmInfo.The "Forum of Ukraine" charitable non-governmental organization supporting refugees from Ukraine was opened in Yerevan. The initiator and founder of the  Organization was a native of Odessa, Elena Shevchuk, who has been  living in Armenia for about 10 years and is one of the active members  of the Ukrainian community in Armenia.

For the last 2 years Elena has been teaching Ukrainian at a Sunday school affiliated with the Federation of Ukrainians in Armenia. From the beginning of  hostilities in Ukraine, Shevchuk, in cooperation with Ukrainians  living in the Republic of Armenia, initiated peaceful actions in  support of their historical homeland.

In a conversation with an ArmInfo correspondent, she said that in  addition to providing humanitarian assistance to those in need, the  Organization's activities include through partner organizations and  private initiatives to provide psychological assistance, assist in  settling, medical care, and ensure the educational process for  children'  It is also planned to organize various social and  educational projects, which have already been actively implemented  since the very first day of the Organization's establishment.  Shevchuk herself calls the created organization a space of love and  freedom. When asked what kind of help Ukrainian refugees need most of  all, how caring citizens of Armenia can help them, Shevchuk noted  that compassion is the most sought-after asset. <The main thing they  need, is not rice, ut just accept, listen, sympathize. Understanding,  in the current situation for refugees from Ukraine, is like a breath  of fresh air.  And this Organization was created in many ways so that  all these people understand that they are not alone here>, she said.

Shevchuk said that she managed to rent premises for the Organization  largely thanks to the funds of private individuals - citizens of  Armenia, and her personal financial resources. The premises were  equipped by the forces of both the citizens of Armenia and  representatives of the Ukrainian Diaspora.  "Perhaps I am the  initiator of all these processes, but I would not have succeeded  without the support of caring people," the head of the Organization  emphasized.  Today, Shevchuk's team consists of about 30 people who  are involved in all processes to provide assistance to Ukrainian  refugees. It is noteworthy that the volunteer headquarters of the  "Ukrainian Forum" included not only local Armenians and Ukrainians,  but also Russians who oppose the war in Ukraine.  Today, mostly  refugees from Kharkov, Kyiv, Mariupol, both Armenians and Ukrainians,  turn to the newly created organization for help. <So far they are not  numerous, but everyone who came to us did not leave empty-handed>,  Shevchuk said.  In the future, according to her, it is planned to  open an account in one of the Armenian banks, where it will be  possible to transfer funds from all over the world to assist  refugees. In subsequent years, if necessary, the Organization is  ready to assist the refugees from Artsakh.  Sharing her personal  story, Elena Shevchuk said that her parents and brother live in her  native Odessa, which has recently been increasingly subjected to  rocket attacks. "My life has changed dramatically since the beginning  of the war. And everything I do today is my way of resisting the  horror that is happening>, Shevchuk shares.  It should be noted that  The "Forum of Ukraine" charitable non-governmental organization  cooperates with the "We" Foundation (Menq enq), "Syunik-Development"  NGO, as well as with the Migration Service of Armenia.