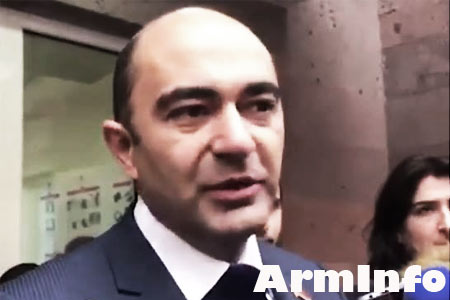 ArmInfo.The statement by the Azerbaijani foreign office has no legal grounds, Ambassador-at-Large Edmon Marukyan stated in an interview with the Public TV of Armenia.

He stressed that no documents on enclaves have to date been presented  to Armenia, with only speculations and different maps published.

"But an important fact is that a map published by either party cannot  be considered a legal basis. Any map must be based on a legal  document. We too can publish a map of Armenia and claim everything  was so," Mr Marukyan said.

When the negotiations on border delimitation and demarcation started,  the parties were supposed to present to each other the legal grounds  for their demands.

"And negotiations are going to start now, and each side will present  the relevant documents. But if no documents have so far been  presented, I do not think any grounds will be available. But if they  present, we are going to discuss them. This process is intended for  understanding the parties' demands and the way of border  delimitation. We know one thing: Azerbaijani troops are just now  deployed in Armenia's sovereign territory and they must leave it.  This is Armenia's urgent demand that will remain in force," Mr  Marukyan said.

Azerbaijani Deputy FM Khalaf Khalafov stated on May 10 that the issue  of returning of eight villages in Armenia's Tavush and Ararat to  Azerbaijan must be settled in the border delimitation context.