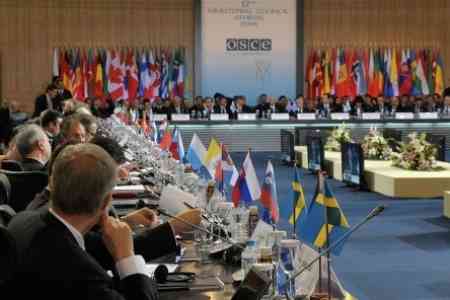 ArmInfo. The OSCE considers the Minsk Group as an appropriate body and sees the need to intensify efforts to establish a stable peace, prosperity and development of  the region. This is stated in the message of the OSCE secretariat.

This is how the secretariat answered the question of RFE/RL whether  they see the prospect of further activities of the Minsk Group  against the background of the fact that Azerbaijan does not de facto  recognize the mandate of the co-chairs, and there are huge  contradictions between the mediators.

However, the OSCE did not comment on the statement of the Russian  Foreign Minister that the United States and France refused to work  with Russia in the OSCE Minsk Group, against the background of the  developments around Ukraine.

"The OSCE Chairmanship does not intend to comment on the statements  within the Minsk Group concerning France or the United States," the  response says.

Also, the secretariat did not comment on Armenia's appeal sent about  two months ago to the co-chairs of the OSCE Minsk Group on organizing  negotiations with Azerbaijan.  "The co-chair countries, like the EU,  have been actively cooperating with Baku and Yerevan in recent weeks.  Armenia and Azerbaijan, as OSCE member states, are aware that the  organization is ready to provide any support, both within its mandate  and in other contexts," the OSCE secretariat noted.