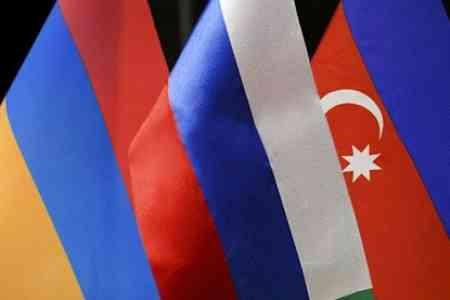 ArmInfo.Foreign Ministers of Azerbaijan, Armenia and Russia Jeyhun Bayramov, Ararat Mirzoyan and Sergey Lavrov discussed issues related to the implementation of  tripartite statements on Karabakh and the normalization of relations  between Baku and Yerevan on the sidelines of the CIS Foreign  Ministers Council in Dushanbe on May 12. This was reported by the  press service of the Azerbaijani Foreign Ministry, TASS reports.

"At the meeting, the parties discussed the current situation in the  region and issues related to the implementation of tripartite  statements," the report says. According to the source, an exchange of  views on issues related to "the normalization of relations between  Azerbaijan and Armenia, including the start of the process of  delimitation of the state border, the opening of all transport and  communication lines, and the negotiation of a peace treaty between  the two countries" took place. "The parties stressed the importance  of fulfilling the agreements reached for ensuring peace and security  in the region," the statement says.  According to TASS, at the  beginning of the meeting, Russian Foreign Minister Sergey Lavrov  thanked his colleagues from Azerbaijan and Armenia for responding to  the Russian side's proposal "to take the opportunity of the  participation of the CIS Foreign Ministers to hold a trilateral  meeting, which will allow the parties to continue joint work to  monitor the implementation of tripartite statements ", which were  previously accepted at the highest level. "We are interested in  turning the South Caucasus into a zone of peace, sustainable  development and prosperity," the head of the Russian diplomatic  department said, adding that it is important for Moscow to increase  trust between the parties while creating conditions for the full  normalization of Armenian-Azerbaijani relations. "I hope that today's  meeting will make it possible to move forward along the path that was  outlined by our leaders," Lavrov said.

In turn, Azerbaijani Foreign Minister Bayramov stressed in his  opening speech that this meeting "is a good opportunity to discuss  the progress that can be achieved." At the same time, he expressed  regret due to the fact that so far there are no proper improvements  in the work on opening transport communications in the region. "I  know that contacts between our partners continue. And we believe that  there is a good prospect, a good opportunity to achieve results and  achieve full implementation of tripartite statements," he said. "I  believe that there are good developments, understanding in terms of  the composition and representativeness of the parties in the  commission on delimitation issues, and I also believe that in the  near future it will be possible, at least, to launch this process."  Bayramov noted that Baku, for its part, "is ready to begin work on a  peace treaty," and the meeting of ministers and the preservation of  contacts between the parties "will have a positive impact on the  continuation of the discussion on this topic."

Armenian Foreign Minister Mirzoyan stressed that Yerevan has been and  remains committed to the implementation of all agreements and  statements between the leaders of the three countries. "We are ready  to continue all work on the current formats: on opening  communications of economic infrastructures in the region, and on a  peace treaty, or, as it is probably more correct to call it, an  agreement on the normalization of relations, the establishment of  relations, and on the solution of all remaining problems, including  humanitarian ones, release of prisoners of war and other issues that  remain unresolved," he said.