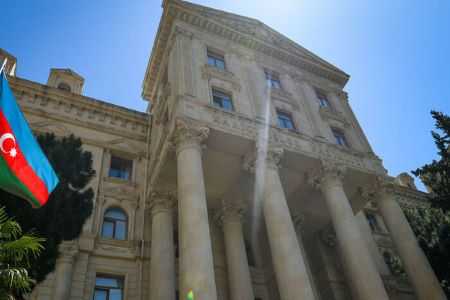 ArmInfo.Baku reacted to the statements of the Prime Minister of the Republic of Armenia Nikol Pashinyan about the prisoners of war.

The Azerbaijani Foreign Ministry said that they consider the  accusations voiced by Pashinyan during his visit to the Netherlands  "unfounded and calling into question the sincerity of Yerevan in the  issue of normalizing relations with Baku and achieving peace in the  region."

"The baseless accusations made by the Prime Minister of Armenia  against Azerbaijan, including far from reality claims on humanitarian  issues, show that the Armenian leadership is not at all sincere in  the issue of normalizing relations between the two countries.  Providing maps of minefields by Armenia is not a "humanitarian  gesture", it is was Yerevan's commitment in the framework of the  tripartite statement dated November 10, 2020. After the signing of  this document, 219 people became victims of mines in Azerbaijan, and  these are mostly civilians, said Abdullayeva. As for the accusations  of not returning the detained Armenians, Baku considers them  saboteurs, sent to the territory of Azerbaijan after the end of the  war. Unfounded accusations against Azerbaijan cast doubt on Armenia's  readiness to act in the name of peace," said Leyla Abdullayeva,  spokeswoman for the Azerbaijani Foreign Ministry.

Thus, from the logic of Abdullayeva, it turns out that only Yerevan  has obligations under the agreement, and they are not obligatory for  Baku. It is also worth noting that in the tripartite statement there  is not a word about the transfer of maps of minefields, however,  paragraph 8 of the statement of November 9, 2020 states the need for  an exchange of prisoners of war and detainees on the principle of  "all for all".

It should be noted that on May 11 in the Netherlands, Pashinyan  touched upon the issue of the return of Armenian prisoners held by  Baku. He expressed regret that, despite the statement of November 9,  2020, in response to the calls of many international organizations,  the citizens of the Republic of Armenia, taken prisoner during the  44-day war, have not yet been returned. "This is the practice of  using people for political purposes and turning them into an object  of trade, which is very reprehensible," Nikol Pashinyan said,  stressing that it was in order to avoid such bargaining that he once  decided to transfer to Azerbaijan all the maps of minefields at his  disposal. The Armenian side hoped that this humanitarian step would  be followed by another humanitarian step.  "Nevertheless, today at  least 38 of our prisoners of war remain in Azerbaijan (according to  unofficial data, there are many more - ed. note). Attempts are  constantly being made to make this process the subject of bidding on  a variety of topics. By the way, for the last time in the presence of  the President of the European Council, the President of Azerbaijan  promised to release another group of prisoners, but this has not  happened yet. I think it is impossible to talk about peace, ignoring  the humanitarian side of the issue, we have shown this in practice,"  Nikol Pashinyan said.