Immortal Regiment March to be held in Yerevan 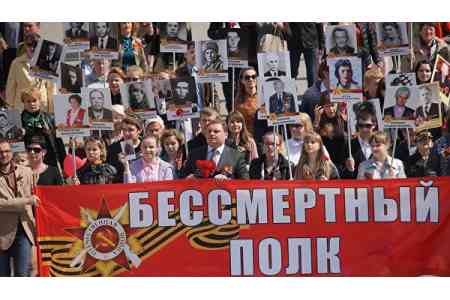 At 11:00am at the eternal flame in Victory Park, everyone will be  able to join the March and raise photos of their relatives.

Similar Marches will be held in Vanadzor, Kapan, Hrazdan and other  cities of Armenia.

It should be noted that the Immortal Regiment March, which has  already become traditional, has been held in Armenia since 2016.

On the same day, on May 9 at 3:00pm at the Moscow Cinema, the  Armenian Immortal Regiment Patriotic NGO will screen the documentary  film "War for Victory". The project is dedicated to the 77th  anniversary of the Great Victory, which tells about the main events  and battles in which the army of Soviet Armenia took part.

The film is based on the memoirs of Armenian veterans of the Great  Patriotic War, where they talk about their direct participation in  the hostilities and the solidarity of the Soviet army.

Veterans of the Second World War, schoolchildren and students of  Armenia, ambassadors of Russia, Kazakhstan and Belarus are invited to  the event.

This is the fourth documentary film about the Armenian veterans of  the Great Patriotic War, prepared by the Immortal Regiment of Armenia  and aimed at the patriotic education of young people.