Forecast: The probability of a big war today is lower than before  September 27, 2020 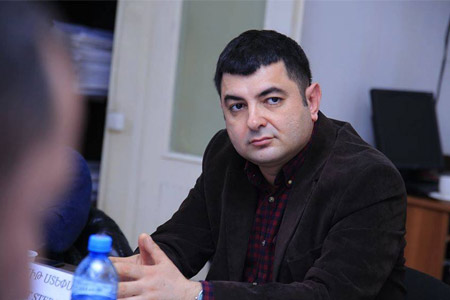 ArmInfo. The likelihood of a major war between  Armenia and Azerbaijan today and in the foreseeable future is  significantly lower than before September 27, 2020. And the regular  meeting held in Brussels yesterday, in the Michel-Pashinyan-Aliyev  format is another confirmation of this. Associate Expert of the  Armenian Institute of International Relations and Security David  Stepanyan expressed a similar opinion to ArmInfo.

Following the talks between Armenian Prime Minister Nikol Pashinyan,  Azerbaijani President Ilham Aliyev and European Council President  Charles Michel in Brussels on April 6, an agreement was reached to  establish a bilateral commission on the delimitation of the border  between Armenia and Azerbaijan by the end of April. The trilateral  talks in Brussels were preceded by separate meetings between the head  of the European Council and the leaders of Armenia and Azerbaijan.

"The very results of the next round of Brussels talks under the  auspices of the European Union detroy another myth, imposed from the  outside, and intensively spread in the Armenian society about the  threat of an imminent and inevitable war. We understand why this myth  is spreading so aggressively from Baku, but for what reasons it is  being spread by some circles in Armenia and Artsakh - a separate and  rather interesting question," he stressed.

At the same time, the analyst noted, that Armenia and Artsakh need to  prepare for the war and always be ready. Especially given the rapidly  changing geopolitical realities and transformations in international  relations and global politics. "There may be war. This scenario can  never be ruled out. But today's realities - the same calls to Yerevan  and Baku made by US Secretary of State Antony Blinken on the eve of  the Brussels meeting of the leaders of the EU, Armenia and  Azerbaijan, as well as its results, at least indicate the absence of  any prerequisites for large-scale hostilities in the short-medium  term," he stressed.

According to Stepanyan, Blinken's calls to Pashinyan and Aliyev were  a reflection of Washington's awareness that Brussels could not give  the conflicting parties, primarily Aliyev, greater motivation for  constructiveness and mutual concessions alone, without the United  States and Russia, especially in the context of Moscow's actual  withdrawal from the background of the settlement, in all likelihood,  temporary.

In the expert's opinion, this is evidenced by the absence of calls  from French President Macron and President of the European Council  Michel to Moscow. While on the eve of the first meeting in the  Michel-Pashinyan-Aliyev format, there were similar calls. According  to Stepanyan, the latter is due to the current relations between the  West and Russia, conditioned by the Ukrainian factor. "The main  conclusion that seems to be possible for Armenia from all this is the  possibility of negotiating without regard to the Azerbaijani  blackmail of the threat of war. Negotiations to define borders,  normalize relations with Azerbaijan, negotiations that allow  postponing the issue of determining the status of Artsakh until  better times Whether Yerevan and Stepanakert will take advantage of  this opportunity, only time will show," the expert summed up.

An agreement on the establishment of the commission was reached in  Brussels in accordance with the statement adopted on November 26,  2021 in Sochi. The commission will also deal with issues of ensuring  security and stability along the entire perimeter of the border. The  leaders of Armenia and Azerbaijan instructed the foreign ministers to  begin work on preparing peace talks.  "The parties have decided to  start a clear process to conclude a peace treaty. We also agreed to  form a working group - a joint commission. I hope that in the coming  weeks we will create a stable connection for contacts. I do not  underestimate the challenges and difficulties that both sides have,  but I feel that there is a common desire to move forward. I am sure  that today we have taken an important step. The process has started  today," European Council President Charles Michel  told reporters  after the talks.